AM to launch 200 Treasures 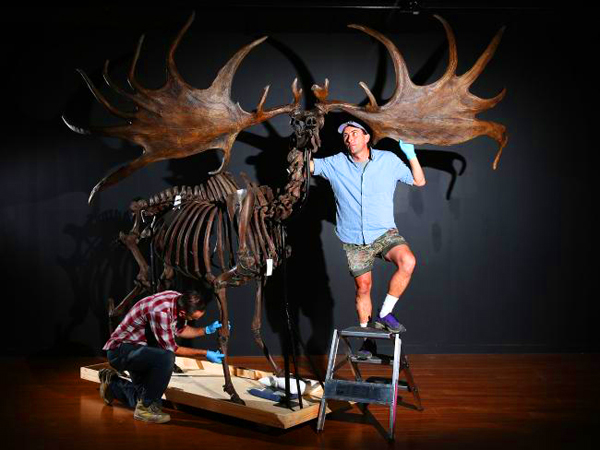 200 Treasures of the Australian Museum exhibition.

Deep in the bowels of the Australian Museum curators prized open a dusty old crate for the first time in 70 years to reveal a quite remarkable beast.

The skeleton of an Irish elk — which is actually neither Irish nor an elk but rather an extinct deer that roamed Europe thousands of years ago — was painstakingly taken out of storage, reassembled and will now be included in a new landmark exhibition.

The astounding specimen was chosen from 18 million or so priceless artefacts, many of which are stashed away gathering dust in the museum’s vast archives, as one of the nation’s 200 Treasures.

Celebrating the objects and people that have shaped Australia, this new permanent exhibition has been collated both to mark the museum’s 190th anniversary and to celebrate the reopening of the Westpac Long Gallery, after $9 million and almost two years of restoration.

It includes 100 of the most important items in the museum’s collection — including Australia’s first bank note, a Tasmanian tiger pup and the only surviving large gold nugget from the early gold rush years of NSW — and 100 people who have helped shape the nation through contributions to history, science, nature or culture.

So big was the task of selecting the treasures that the museum called in a hired gun to help sort through the millions of possibilities.

The Irish elk is one of the most impressive, with antlers spanning three metres it dwarfs all living deer and even moose. It was found perfectly preserved in a peat bog, an oxygen-starved quagmire that mummifies any hapless animals or people who fall in.

The specimen is commonly mistaken for a fossil, but according to exhibition project manager Fran Dorey it’s not nearly old enough.

“A fossil occurs when organic material is replaced by stone, which usually happens over a few million years,” Ms Dorey said.

The Irish elk arrived in Australia in 1886, when the Australian Museum introduced its own formal study of science and first refused to be pilfered by elite English institutions like the Natural History Museum in London.