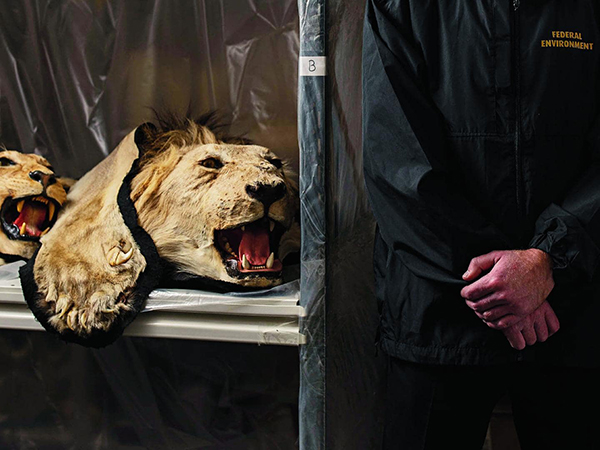 Inside the ‘Dead Shed’ in Canberra. Picture: Sean Davey.

Why would you bother smuggling drugs, where the penalties are severe, when you can earn millions pilfering wildlife for free with virtually no consequences?

We descend into the cold Canberra earth, within the bowels of the John Gorton Building, led by a man we are ­forbidden to quote by name. The Man With No Name leads us down a corridor to a room with the title Secure Seizures Storeroom. It has another, unapproved name: The Dead Shed. The Man swipes his security pass and we enter a grim Aladdin’s cave of natural history. 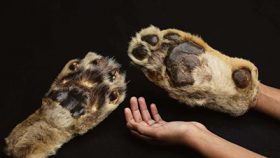 He lifts a plastic sheet and lying on the top shelf is a polar bear, a magnificent species that evolved in the harshest conditions on Earth to become a fireside rug. Below that are a lion and a lioness that were destined for the same fate before being intercepted at the border. “We call this one Bruce,” the man says of the lion. The lioness, like him, is anonymous. Behind that are the feet of elephants retooled to become footstools and umbrella stands. He hands me a metre-long carved elephant tusk and I’m surprised at how heavy it is. It’s one of dozens. He then shows me one of the most grotesque fashion items ever produced; I put my hand inside a lion’s paw that was hacked off the dead beast and converted into a glove.

“This is my skull collection,” he says, pointing to a shelf of heads. “This is a bear skull. ­Hornbill. Orang-utans. Polar bear. Monkey. ­Monitor lizard…” On a shelf opposite are various musical instruments. There’s a guitar constructed from the shell of a turtle. I strum a mandolin made from an armadillo. Beside that is a macabre ashtray made from a monkey’s skull. He pulls out a bottle of whisky from Laos that has a snake and a scorpion embalmed within — Usage: Rheumatism, Lumbago, Sweat of Limbs. Dosage: Twice a Day. Eacha Small Cup Before Meal. There are tins purporting to ­contain bear meat from Russia, others of whale meat and zebra paté and Chinese herbs for horniness said to be ground from various bits of tiger.

He points out a couple of large boxes on a shelf. “This was from our biggest ever haul,” he explains. Our guide is an employee of the federal Department of the Environment and Energy, which is responsible for policing the smuggling of animals, dead or alive, in or out of Australia. The list on one box reads: “Orang-utan skulls x 4, baboon skull, squirrel monkey skull, vervet monkey skull, sun bear skull, black bear skull, polar bear skull, tiger skull, vulture skull, ocelot skull, otter skin, black bear skins…” It goes on and on and is the result of the bizarre obsession of a Parramatta schoolteacher, John Kolettas.

In 2013, officers raided Kolettas’ house in western Sydney and discovered 78 body parts of exotic animals, 24 of them threatened species; he’d ordered his collection over the internet and the bony menagerie arrived by post. Kolettas pleaded guilty to 24 charges of possessing illegal wildlife products and faced a maximum of 10 years’ ­imprisonment. Instead, for this sunken ark he got a community service order (plus a $4000 fine for possessing an unregistered firearm). Our Dead Shed guide explains this is but a tiny fraction of the smuggled animals and their parts discovered coming into Australia — the vast majority, including live animals, are usually documented and destroyed.

And then there are the Australian species being smuggled out alive. Our guide pulls out a box ­containing singlets and underpants that have pouches sewn into them for smuggling bird eggs, to keep them warm on international flights — actual budgie smugglers. Australian lizards, snakes, ­turtles, birds, fish, marsupials, scorpions and ­spiders are highly sought after by collectors abroad. Many of these animals will die inside a rice cooker posted to Hong Kong, or taped up inside cartons en route to Düsseldorf. Wildlife smuggling is a cruel numbers game — stuff in enough and a few will survive.