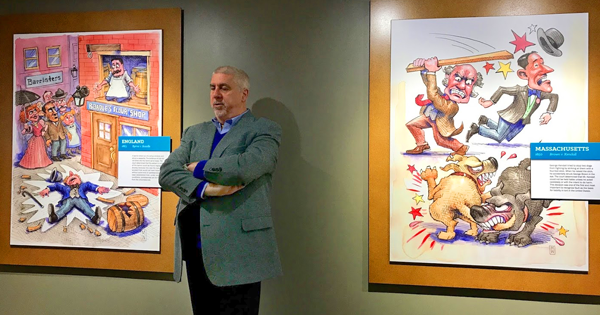 Richard Newman, director of the American Museum of Tort Law.

J. Nathan Matias, The American Museum of Exploding Cars and Toys That Kill You, Medium, 31 January 2018

Everyone in tech should visit this museum, and so should you.

How do lawsuits grow our understanding of the risks and harms of new technologies? What incentives do they offer corporations to ensure the safety of their products?

To find out the answer, Nikki Bourassa (@nikkiboura) and I organized a road trip from Harvard’s Berkman Klein Center for Internet and Society to visit the American Museum of Tort Law in Winchester Connecticut– the only museum in the U.S. dedicated to any part of the law.

On the drive, we listened to a podcast by 99% invisible that told the fifty-year story of research and activism on the idea that car design influences people’s safety. I learned that the Egg Drop science fair project has its origin in the safety crusade of engineering professor Hugh DeHaven, who used the stunt to show that engineers were better at protecting eggs than protecting human bodies. DeHaven also pioneered crash testing, invented the three-point seatbelt, and laid the groundwork for today’s focus on vehicle safety.

As a researcher, I’ve tended to focus on people like DeHaven, who changed how we understand, measure, and improve societal problems. I’ve written about the science behind public-interest environmental safety, food safety, and digital safety. But research can’t change the world on its own; for that, we need activists, lawyers, and courageous citizens who work for the public good. Our trip to the Museum of Tort Law gave me an introduction to the legal systems that make research meaningful to people’s lives.

What is a Tort?

Tort law, which is governed by civil law, covers injuries that may not be covered in criminal law, but which still involve some kind of harm or wrong to the injured party: anything from a faulty product to defamation. Torts in the English tradition were developed as an alternative to duels: In the late 17th century, more than a fifth of duels ended in death and 49% of duels involved significant injury. Lawsuits were a safer alternative to rapiers, and while you can’t shoot pistols at dawn with an institution, you can definitely sue them.

Salome writes: A lot of torts overlap with things that are also crimes, but torts are governed by civil, not criminal law. Think of it this way: criminal law involves the state prosecuting individual defendants for harms we call crimes. Criminal law is not really “about” the victim — it’s about a defendant’s violation of the general social contract. Tort law allows a private individual (the plaintiff) to sue another private individual (the defendant) for a wrongful injury. It is a civil (as opposed to criminal) process that allows the plaintiff to make his/her case of injury and seek some redress from the party who wronged them.

How do you make the legal system interesting to a public audience? When we arrived, museum director Richard Newman explained that tort law is a particularly-democratic part of the law: when new products, technologies, or societal issues emerge, they might not yet be regulated. Tort cases provide a powerful way for any citizen to draw attention to a problem that affects them. Since the cases are heard by a jury, torts offer a powerful lever for citizens to create change. But this powerful tool only works if citizens are willing to use it; educating citizens is central to the value of tort law to society.

To teach our group about tort law, Richard used the same method used with law students: he told us about famous cases, the legal principles they reveal, and how they shaped the laws we have today.

Intention, knowledge, recklessness, and negligence: how do we determine if someone should be responsible for harm that occurred? In Brown v. Kendall, a man accidentally struck a bystander while attempting to use a four-foot board to break up a fight between dogs. The case ultimately hinged on whether his behavior was negligent or not.

Because he didn’t intend to cause harm to the bystander, he should only be considered responsible if he did not act with “ordinary care.” This case established the rule that responsibility for negligent harms — harms that are not intended — depends on whether the actor behaved as a “reasonable person” would; namely, with ordinary or reasonable care.

The court decided that in this case, since the barrel clearly didn’t jump on its own, the flour shop owner was still negligent. This case established the rule that negligence can be presumed in accidents that wouldn’t normally occur unless someone was negligent. In these cases, the burden falls on the defendant to show that they are not to blame for the injury.

You can’t make dangerous things attractive to children: In Sioux City & Pacific Railroad Co. v. Stout, the railroad company knew that children liked to play on the tracks, and that their train turntable was dangerous. But the traditional rule was that companies were not responsible for the injuries of trespassers — even children.

Manufacturers are responsible for the harms from defective products:When Donald Macpherson was injured in a car crash that resulted from a defective wheel, Buick Motor Company argued in Macpherson v. Buick that they weren’t responsible, since they were the manufacturer, not the seller and therefore had had no personal relationship with Macpherson on which to base responsibility for his injury.

In this case, the court abolished this requirement of a personal contractual relationship when it comes to manufacturing defects. Manufacturers are held responsible for the outcome of their defective products, an obligation that has been part of U.S. case law ever since.