You are here: Home » Articles filed under: 'News' » Article: 'America’s Museums have become a'

America’s Museums have become a

June 20th, 2019 | Browse other: News. | Tagged with: OxyContin, When Some of the Best-Attended Exhibitions in Museums Are Protests | 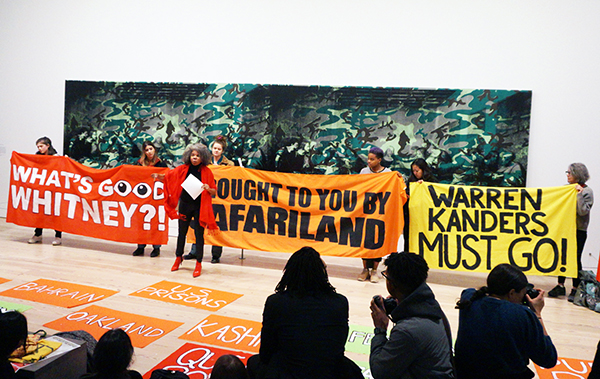 A protest held by Decolonize This Place held at the Whitney Museum on March 22, 2019. Speaking here is Alicia Boyd, of the group Movement to Protect the People. Katherine McMahon/ArtNews.

Barbara Pollack, Exhibiting Change: When Some of the Best-Attended Exhibitions in Museums Are Protests, Where Do Institutions Go from Here?, ARTnews, 21 May 2019

On a cold night this past February, a group of students, artists, and activists filled the rotunda of the Solomon R. Guggenheim Museum in New York. Some released clouds of flyers styled after doctors’ prescription pads, carrying the slogan “Shame on Sackler,” a reference to the philanthropic family whose name has become synonymous with the opioid crisis. Others lay on the floor, staging a “die-in.” The action was the latest in a series led by famed photographer Nan Goldin; as information has become public through a series of lawsuits that the Sackler family’s company, Purdue Pharma, widely and successfully promoted OxyContin despite knowledge of its addictive effects and its role in some 200,000 deaths from overdose, Goldin, through her organization, PAIN (Prescription Addiction Intervention Now), has pressured museums both in the U.S. and Europe to relinquish ties to the family. Her efforts have not been in vain: By April, the Guggenheim—which houses the Sackler Center for Arts Education and received $9 million from the Sackler family between 1995 and 2015—announced that they would no longer seek or accept donations from this source. 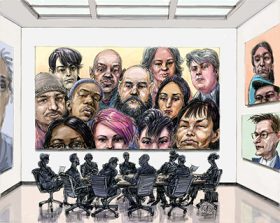 A museum board under scrutiny. Illustration: Victor Juhasz.

“My god, museums are the repository of culture; they’re supposed to be a safe place in this world that isn’t dirty where you can actually enjoy beauty and learning,” says Goldin, who started PAIN a year and half ago as she herself was recovering from an addiction to OxyContin. “The Guggenheim has made a strong declaration and I hope that other American museums will follow suit. I don’t know what they are waiting for.”

Once ivory towers of culture, far removed from politics and controversy, museums have increasingly come into the spotlight as sites of protest and places where equity, diversity, and inclusion have become imperatives. From the push of the New Museum’s staff for unionization to the Museum of Modern Art’s plans to reinstall its permanent collection to reflect a diversified canon, museums across the country are now more than ever under pressure to change, both for practical and ethical reasons. Museum directors, ever aware of the need to address changing demographics and the demands of social media–savvy audiences, are adapting to this evolution, though for many, this is a sharp departure from their traditional training in art history and curatorial studies.

The Guggenheim wasn’t the first institution to respond to Goldin’s protests, which began at the Metropolitan Museum of Art in 2018 and have since been held at the Harvard Art Museums in Cambridge, Massachusetts, and the Freer|Sackler Gallery in Washington, D.C. Days before the Guggenheim made its announcement, the National Portrait Gallery and Tate Modern, both in London, made similar statements, and mere days after all these announcements were made, the Sackler Trust, a London-based philanthropic organization, said it would “temporarily pause” donations to arts institutions. Last week, as ARTnews went to press, the Met, whose Sackler wing houses the Temple of Dendur, announced that it, too, will cease accepting Sackler money. The Smithsonian with its Freer|Sackler Gallery is reviewing its donation policies. This is a victory for PAIN far beyond their expectations and a clear indication that museums are increasingly sensitive to political pressure and public perception of their fund-raising practices.

[See the Table of Contents for the Summer 2019 edition of ARTnews: “Reshaping the American Museum.”]

In New York, PAIN’s wasn’t the only protest going on. Downtown, the Whitney Museum of American Art was under siege for nine weeks leading up to the Whitney Biennial, with weekly demonstrations led by a coalition of groups under the umbrella Decolonize This Place. The organization takes its name from one of an exhibition that prompted its creation in 2016. The founders protested the funding by a pro-Israel organization of “This Place,” a show at the Brooklyn Museum that dealt with the Israel-Palestine border. At the Whitney, DTP is focused on the removal of vice chairman Warren B. Kanders from the Whitney board. Kanders’s company, Safariland, manufactures teargas canisters and other products that have been used against asylum seekers along the U.S.-Mexico border. In December, 95 Whitney staff members, including curators Marcela Guerrero and Rujeko Hockley, signed an open letter that urged the museum to consider asking for Kanders’s resignation. Whitney director Adam Weinberg responded by calling for conversation, and Kanders issued a statement saying that he was “not the problem.” In April, a letter signed by more than 100 critics, curators, and academicians, including Benjamin Buchloh and Hal Foster, urged the Whitney to take action. A few weeks after the letter was first released, nearly 50 participants in the 2019 Whitney Biennial added their names.

Though Weinberg, through a Whitney representative, declined to be interviewed for this article, it is clear that Decolonize This Place is having an impact and that its wide-ranging goals are not limited to the Whitney. For DTP, “decolonizing” covers six areas—a free Palestine, indigenous struggle, black liberation, patriarchy, degentrification, and global wage workers—according to Marz Saffore, an artist and key organizer of the collective. “There’s different things you can pick out from any institution and what’s great about using museums in this way is that it offers a platform for multiple struggles to come together because many of the people that we all can point to as a common enemy are art-washing their money, gained through real estate or . . . through state violence,” she said.

Museum directors, ever under pressure to raise funds to sustain their institutions, are on notice now, perhaps more than ever before. Whereas public protests in the 1990s came mostly from the right over controversial artworks in what was called the “culture wars,” the new wave of protests is more concerned with social justice issues and is harder to dismiss. Fund-raising demands have been extreme for directors for nearly two decades, during a time of expansion for institutions, but, said Bruce Altshuler, director of the Program in Museum Studies at New York University, “I don’t think that’s really changed the nature of the job.” The new issues are another story. “More recently, social media and the way in which museums are increasingly in the public eye around especially ethical issues has become very fraught and makes the job extremely difficult,” Altshuler said. “And has happened very quickly.”