You are here: Home » Articles filed under: 'News' » Article: 'AMNH workers push to unionise in response' 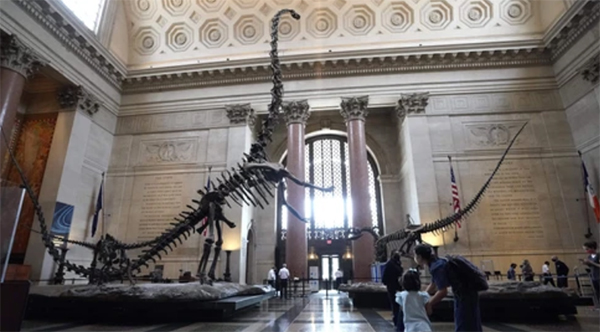 PHOTO BY TIMOTHY A. CLARY/AFP VIA GETTY IMAGES.

Lauren Kaori Gurley, ‘They Should Be Ashamed’: Understaffing at NYC’s Beloved Museum of Natural History Pushes Workers to Unionize,

Roughly 200 workers at the American Museum of Natural History are voting on what could be the largest expansion of the union in the museum’s history.

When the American Museum of Natural History in New York City reopened its doors to the public in September 2020, guest services representatives were among the first back to  the museum getting visitors in to see the “Hall of Ocean Life” and “Lucy,” an exhibit of one of the most complete skeletons of hominids that existed between four and two million years ago.

Rebecca, a guest services representative at the museum who makes $17.50 an hour, told Motherboard that verbal abuse from guests has always been a problem, but escalated to new levels when the museum first reopened in 2020. She would double-mask with a face guard and be expected to simultaneously ensure guests were socially distancing, while talking on the phone and in-person to guests, often international tourists who spoke little English. “There just wasn’t enough staff. There were a lot of upset guests, cursing us out for the new processes,” Rebecca said.

“I’ve been verbally abused about museum policies such as making a reservation, especially when it was for contact tracing,” she said. “Once someone without a mask approached me and went off saying that the pandemic was fake. I had another man tell me that we were commies and that it was unconstitutional to ask for his information.”

Rebecca asked to remain anonymous because she feared retaliation from the museum.

A large part of the problem stemmed from understaffing due to layoffs, furloughs, and other departures during the pandemic, Rebecca said. In May 2020, the museum announced it would cut its staff of 1,100 employees by 20 percent with layoffs and indefinite furloughs. That year, the museum’s president, Ellen Futter, was compensated $1.2 million, making her one of the highest paid museum executives in the United States.

When Rebecca returned to the museum in 2020, guest service reps were required to take on the responsibilities of membership services (selling memberships, documenting concerns and complaints from members, printing out tickets), a department that had been absorbed into hers. “On my first day back, I suffered a panic attack,” Rebecca said. “I didn’t feel I was prepared—didn’t feel confident. The level of stress has taken a mental toll.”

Rebecca is part of a group of roughly 200 workers at the beloved New York City cultural institution that is voting on whether to unionize on Thursday and Friday with District Council 37, New York City’s largest public sector union, which already represents dozens of workers at the museum, largely in specialist positions. (The museum is privately owned, but receives enough funding from the government for its workers to qualify to be in a public sector union.) A victory for the union would mean the largest expansion of the union in the museum’s history.

The election is a vote on a wall-to-wall expansion of Local 1559, which represents the museum’s workers aside from security guards and Head Start employees. In recent decades, Local 1559’s membership has plummeted from more than 200 workers to 70 workers, as jobs have been cut during periods of austerity and reduced tourism in New York City, such as post-9/11, the 2008 recession, and the pandemic, and the museum has positions removed from union eligibility.

In recent weeks, the Natural History Museum has responded to the unionization effort with a series of meetings, emails, FAQs, and communications intended to convince workers against voting for the union by saying they could earn less, lose money from dues, and no longer have a say in their working conditions.

The union campaign arrives during a wave of organizing at museums and other cultural institutions across New York City and the United States, such as the Guggenheim and the Art Institute of Chicago.

“I think that the museum wants to project an image of a progressive institution but upper management is fighting with all its strength and all its extreme riches to oppose the workers from organizing and having a voice in their own future and their own fate,” Anna, a worker in the education department told Motherboard. “They should be ashamed of themselves.” Anna asked to remain anonymous because she feared retaliation from the museum.

On Tuesday, two days before the election began, workers received an email and fact sheet from human resources with a list of standard anti-union talking points, suggesting that workers could end up with lower wages and fewer benefits if they vote to unionize.

“There is no guarantee or legal requirement that any current terms will be maintained,” the email states. “The Museum has no intention of reducing pay rates in the event of unionization, but it is simply wrong to say that is impossible.”

A spokesperson for the museum told Motherboard in a statement, “The Museum respects the right of our staff to decide whether to vote to unionize. Our communications have been aimed entirely at encouraging staff to be informed and to vote, and have not been anti-union.”

Three workers told Motherboard that the museum’s messaging and actions have had a chilling effect, and many workers are afraid of retaliation for speaking out about the campaign. In December, the museum fired Jacklyn Grace Lacey, organizing chair of DC37 Local 1559. Lacey, a senior museum specialist of African and Pacific ethnology, told Motherboard that after going public with union drive in October 2021, she received seven written warnings from the museum about on-site attendance after filing complaints with OSHA about worksite safety. She was subsequently fired after experiencing a case of severe Covid that sent her to the emergency room, she says. Prior to that, Lacey worked at the museum for 11 years with no disciplinary history. Lacey has filed an unfair labor practice charge with the National Labor Relations Board.

“They’ve been doing their best to scare people into voting ‘no’ with these very sneaky emails,” said Anna, the worker in the education department. “People are scared of retaliation for supporting the union, especially since there’s a case where they’ve terminated the leader. That sent a strong message that they’re willing to do that and that everyone should watch out.”

The group of unionizing workers has a vast array of workplace concerns that vary from temporary employment status to health and safety to wages. Two workers told Motherboard that their work stations and offices are regularly covered in mouse feces. “There was a time when our morning ritual was to disinfect desks of mouse poop,” one worker told Motherboard.

In the education department—which includes teachers, curriculum developers, and writers—workers say a main concern is job security and pay discrepancies. The museum keeps many of these workers in limbo as contractors in positions that expire each year. Two workers also told Motherboard that some workers make tens of thousands of dollars less than their peers for doing the same exact job.

“The union will give us a voice that will help us get job security, get regular raises, get benefits that we all need, get safe workspaces and address pest control and Covid safety,” said Anna, a worker in the education department who has been at the museum for four years.

Nadav Gazit, a visual creative and research assistant at the Center for Biodiversity and Conservation told Motherboard that he wanted to unionize to improve pay, ensure he is able to keep a medical accommodation for PTSD, and to help international workers secure visas. “The museum doesn’t support visas unless you’re a curator. The advice I got from folks was to get married,” he said.

Rebecca, the guest services representative who has worked at the museum for roughly three years, told Motherboard that many people in her department work multiple jobs to pay their bills. “Living in New York, I myself struggle to make ends meet,” she said. “I can pay the rent but I have a few hundred bucks left for food, transportation, and clothes. I often have to wait until I save enough money to buy clothes.”

During the pandemic, Rebecca said workers had to supply their own PPE such as hand sanitizer, because the museum did not provide enough and took months to get workers coats and boots when they were required to work outside in the winter.