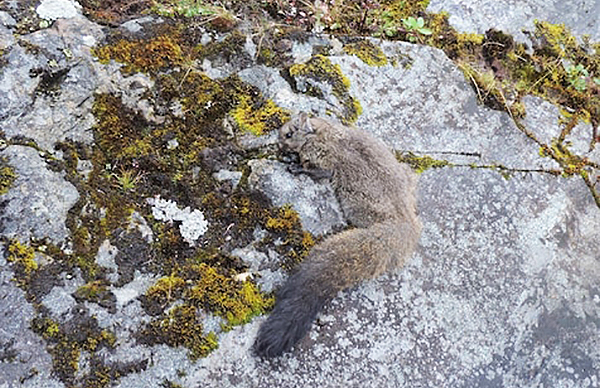 The Yunnan woolly flying squirrel (pictured) lives in the mountains of southwestern China, a hot spot for biodiversity. Photo courtesy of Qua Li.

The rodents, which live at elevations of more than 15,000 feet, have fluffy tails that act as rudders while they sail between rocky cliffs.

It’s not easy making a living among the wind-scoured rock faces of the Himalaya, home to the world’s tallest mountains. Beyond large boulders and caves, only a few scraggly trees provide protection from predators and shrieking gusts.

Among the hardy inhabitants is the woolly flying squirrel (Eupetaurus cinereus), which, at five pounds and three feet long, is one of the world’s largest squirrels. It’s also one of the least known mammals on Earth: First named 130 years ago, the house cat-sized rodent was believed extinct until its “rediscovery” in the 1990s.

Kristofer Helgen, chief scientist and director of the Australian Museum Research Institute, has been drawn to animals that exist mostly as scientific question marks.

Intrigued by some recent squirrel sightings in the Himalaya, Helgen—a National Geographic Explorer—and his colleagues decided to dig deeper into this mysterious species by examining museum specimens and collecting data from sightings of the species, such as from camera traps. (Read about India’s giant purple squirrels.)

This animal was captured on a camera trap in the Gaoligongshan National Nature Reserve near the border of China and Myanmar (Burma).

The former lives at the intersection of India, Bhutan, and Tibet, whereas the latter dwells thousands of miles to the east, in the Yunnan Province of southwestern China, according to the study published recently in the Zoological Journal of the Linnean Society.

“This discovery is so exciting,” says John Koprowski, a squirrel expert at the University of Wyoming who was not involved with the research. “That there were two relatively large animals that had gone unreported shows how little we know about the natural world.”

‘No zoologist dared to describe it’

The woolly squirrel’s rocky habitat, at elevations of nearly 16,000 feet, is remote and uninhabited, part of the reason why few Western scientists have even seen the animal in the wild. The creature’s nocturnal nature and grayish-brown fur, which blends into the rocks, makes it even harder to spot. When zoologist Oldfield Thomas identified it in 1888, he noted that “no zoologist has dared to describe it.”

Then zoologist Peter Zahler “rediscovered” the animal in a remote corner of Pakistan in 1994, allowing scientists to learn more about the secretive species—that it exists solely on pine needles and juniper leaves, and that its tall teeth are ridged to grind down waxy leaves and extract their paltry nutrition. (Read about some flying squirrels that secretly glow pink.)

“Flying squirrels” is also a bit of a misnomer: The animals glide between rocks and cliffs using skin stretched between their front and hind legs.

Their long, fluffy tails, often as long as the body itself, act as a rudder and can function as an umbrella in a sudden downpour. The rodents’ large body size also conserves heat in the frigid mountains, as does their dense, plush fur.

The more Helgen and colleague Stephen Jackson learned about the squirrel, the more they believed the Himalaya would be home to more giant woolly flying squirrels than once thought. (Read about a new flying squirrel discovered in the United States.)

When the pair visited eight museums worldwide to examine 24 woolly squirrel specimens—the newest of which was nearly 50 years old—Helgen and Jackson discovered the shapes of the squirrels’ skulls showed major differences, and that the animal soon to be named E. tibetensis had a black tip on its tail, which was lacking in the other pelts. DNA analysis confirmed the species is actually two.

“These species have been waiting in a museum drawer for a hundred years to reveal their secrets,” says Melissa Roberts Hawkins, curator of mammals and a squirrel expert with the Smithsonian Institution.

Hawkins says that looking at body structure and genetics are essential in studying flying squirrels because “two squirrels can look very different and be the same species, and two other squirrels can look identical but be separated by several million years of evolution.”

Since the information was gleaned from a limited number of museum specimens, Helgen says both woolly squirrel species’ population size and threats are unknown.

“This is only the beginning,” Helgen says. “Now that they’ve been named, scientists can learn more about how they live.”