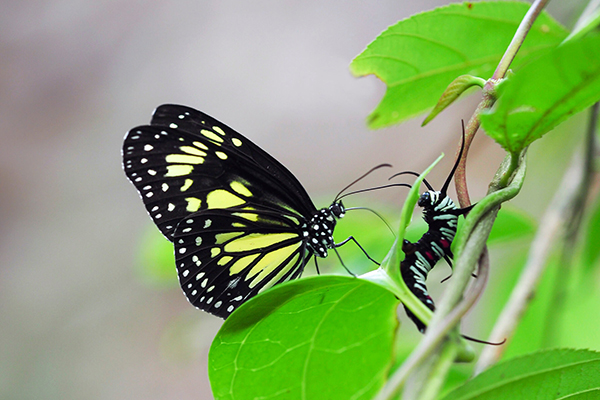 This behavior by the fluttering insects was so unusual that scientists had to invent a new word to describe it.

Butterflies seem gentle as they flutter from plant to plant. But some may be more murderous than you imagine. Naturalists recently witnessed several species of milkweed butterfly harassing, subduing and subsequently feeding on milkweed caterpillars, presumably to get their fill of toxic alkaloids inside the larvae.

This behavior was described in an article published Wednesday in the journal Ecology. The authors of the paper say they are unaware of similar behavior being documented among other butterflies, or any insects for that matter, that are so closely related. Although butterflies had previously been observed feeding on grasshoppers that harbor toxic alkaloids, no one had ever documented adult butterflies stealing such compounds from their own kin.

Scientists did not have a word to describe this toxic behavior, so the study’s authors came up with one: kleptopharmacophagy.

The discovery was made in December 2019 when two friends traveled to the Tangkoko Batuangus Nature Reserve on the northern part of Indonesia’s Sulawesi island. Yi-Kai Tea, a graduate student studying ichthyology at the University of Sydney and the Australian Museum Research Institute, and Jonathan Wei Soong, a naturalist from Singapore, share a passion for macro-photography and butterflies and had decided to spend their holiday photographing the reserve’s stunning array of fluttering insects.

Many of the butterflies the pair were hoping to see were milkweed butterflies. There are some 300 species in the group, including the iconic Monarch, all of which are toxic to would-be predators. They gain most of their toxicity by feeding on plants rich in alkaloids and come in a variety of bold and brilliant colors that serve as warnings to potential predators.

On the first day of their trip, the two men visited a forested area by the beach and stumbled upon a butterfly bonanza. Hundreds of milkweed butterflies from several species were swarming around a patch of vegetation near the forest floor, a rare sight even in this lush reserve.

Delighted, Mr. Tea and Mr. Soong spent hours photographing the insects. It wasn’t until the end of the day, when they were going over their pictures, that the two men realized they had documented strange and sinister behavior.

After making the initial observation, Mr. Tea and Mr. Soong spent the next two days at the site doing their best to document the gruesome gorging in greater detail.

“We thought it was really cool,” Mr. Soong said, adding that he finds milkweed butterflies “kind of metal.”

Mr. Soong and Mr. Tea spent hours watching seven different species of milkweed butterfly, including Blanchard’s ghost and the ismare tiger butterfly, scratching caterpillars, both dead and alive, so violently with mighty claws on their feet that the caterpillars’ internal juices oozed out. They said the behavior can’t be described as predatory because many caterpillars survive the encounters.

They also observed butterflies doing the same thing to the leaves of plants known to contain toxic alkaloids. As caterpillars, milkweed butterflies eat leaves loaded with pyrrolizidine alkaloids to make themselves unpalatable to their predators.

Having a steady supply of pyrrolizidine alkaloids is also important for male milkweed butterflies. These alkaloids are an ingredient in mating pheromones and also in nuptial gifts, which are globs of sperm and nutrients that males attach to their mates’ abdomens during sex. Of the dozens of butterflies that Mr. Tea and Mr. Soong saw scratching leaves and caterpillars, only one was female. This imbalance supports the researchers’ hypothesis that the milkweed butterflies were attacking caterpillars to get the toxic alkaloids sequestered in the prey’s bodies. However, more research is needed to confirm this.

“One of the highly desirable follow-up experiments would be to see if the compounds are actually transferred,” said David Lohman, a co-author of the study and an insect biologist and associate professor at City College of New York.

Mr. Tea believes that such butterfly-on-caterpillar violence is not unusual. “Butterflies have a whole repertoire of really gross and nasty behaviors,” Mr. Tea said. One example is pupal rape, a phenomenon in which male butterflies force their way into the chrysalises of female butterflies that haven’t finished metamorphosing and force them to mate, he said.

Clint Penick, an assistant professor at Kennesaw State University in Georgia who studies the social lives of insects and was not involved in the study, agreed.

“The more we zoom in, the more we find insects that are fighting each other and drinking each other’s blood,” Dr. Penick said. “That’s one of the fun things about studying insects, you can literally walk out your front door and witness some pretty wild biological interactions, just on a small scale.”

Mr. Soong and Mr. Tea are eager for their fellow lepidopterophiles to keep an eye out for more examples of butterfly kleptopharmacophagy, and to share them via a photo of the behavior at Hungrymilkweed@gmail.com.