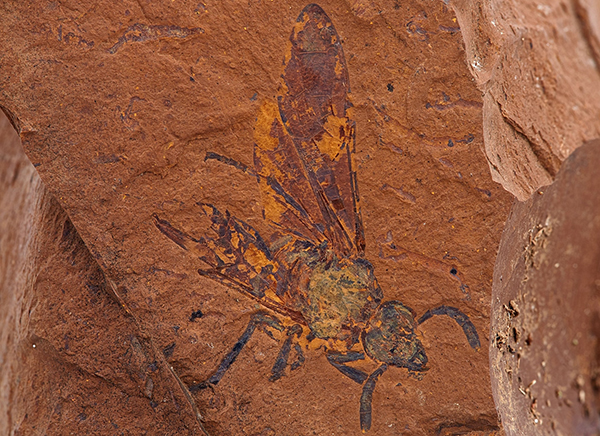 This sawfly lived in what is now south-eastern Australia between 16 and 11 million years ago, and grains of pollen are still preserved on its head—a snapshot of life in an ancient rainforest. Michael Frese.

Hundreds of amazingly well-preserved finds from Australia include plants, insects, fish, and more that existed more than 11 million years ago.

Some 16 miles outside of the town of Gulgong in southeastern Australia, landowner Nigel McGrath spent one day a few years ago working a particularly tough part of his fields. The patch of land was strewn with heavy, iron-rich rocks that menaced his farm equipment, so McGrath had to haul the loose blocks into piles by hand. That’s when he noticed them: immaculately preserved fossil leaves, tucked into the rocks like pressings in a book of stone.

Now scientists have confirmed that these ironstones—strewn over an area no bigger than half a football field—contain one of the most astonishing records ever found of life in an ancient rainforest.

Unveiled in the journal Science Advances, the site—known as McGraths Flat—is one of only a few places in the world that preserves rainforest ecosystems dating back to the Miocene epoch, a time period that lasted from 23.03 million to 5.33 million years ago. During this time period, the world saw massive ecological change, and Australia started transitioning from mostly rainforest—like the modern-day Amazon—to the shrubby, grassy drylands we see today.

There are other Miocene fossil sites in Australia that are famous for mammal and reptile bones, but these sites don’t always preserve the innumerable small, squishy things that form an ecosystem’s foundation. McGraths Flat has an abundance of these smaller fossils, chronicling an astoundingly diverse rainforest that grew in New South Wales between 16 million and 11 million years ago.

At McGraths Flat, spiders fossilized down to their leg hairs, and fossil fish are still engorged with bellies full of midges. Leaves are preserved with such fidelity, researchers can see the pores they once used to suck in CO2.

“The exceptional quality and quantity of the material discovered is remarkable, as is the biological and ecological information extracted and presented,” says University of New South Wales paleontologist Suzanne Hand, an expert in Miocene fossils who wasn’t involved with the new study.

The McGraths Flat fossils even contain snapshots of life in action. One sawfly’s head was covered in pollen, presumably after feasting on a flower’s nectar. One fish’s tail held a passenger: the parasitic larva of a mussel, which subsisted on the fish’s slime as it hitched a ride upriver.

“Because of the quality of preservation, we can see into these ecosystems like never before,” says Matthew McCurry, a co-lead author of the new study and paleontologist at the Australian Museum Research Institute in Sydney.