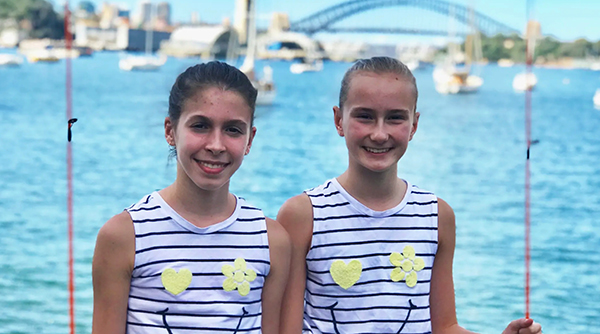 A project by two Sydney school students tracking how microplastics flow from the household sink all the way to the insides of marine life is among the finalists for this year’s Eureka science prizes.

Presbyterian Ladies College students Tsambika Galanos and Ellie Cole were inspired to investigate the problem of how microplastic end up in waterways after they used beauty products at a sleepover.

“We put on facemasks at the sleepover and after we washed them off we saw these tiny little beads in the sink and we wondered what they were,” Tsambika said.

The 12-year-olds decided to investigate where the beads end up, leading them to interview scientific experts, visit a wastewater treatment plant and gut fish to examine their stomach contents.

“It was very disgusting cutting up fish and not enjoyable but we wanted to do it to show our marine life does matter,” Ellie said.

Her mum, Kate Cole said she has nothing but admiration for the pair who went beyond the call for the project and did a large amount of it during their school holidays.

“Both Tsambika’s mum and I don’t know how to gut fish so we had to take them to the fish market and we had to ask the fishmongers to teach them,” she said.

The students documented their journey in a three-minute video titled Fish Fiasco and have been nominated for a prize at the Australian Museum Eureka Prize awards in the school science category.

“They have found something they were concerned about in their everyday life and done their own investigation which is what science is and shared it with the public,” their science teacher Annie Martin said.

“I think it is pretty impressive because they were only in year seven and they are in with kids up to Year 12.”

The school also has another nomination in their junior school with Evelyn Cahill and Lucy Carlisle nominated for their video Polar Bears Need their Ice, Ice Baby which looks at climate change and how the energy consumption habits of Australians are hurting the habitats of polar bears in the Article Circle.

“To have 11-year-old children who care about the environment and not just in their own backyard but in another part of the world I think is a really important thing,” Ms Martin said.

The teacher said although students have access to myriad scientific information online, it was important to teach them how to share that information properly.

“They do all sorts of experiments in the movie and that’s what makes it engaging,” Ms Martin said.

In the research category, Professor Longbing Cao from the University of Technology is among the finalists for his use of data to help businesses make smarter decisions. Associate Professor Melody Ding of the University of Sydney has also been recognised in the leadership category for mentoring scientists from culturally diverse backgrounds.

Meanwhile, The Sydney Morning Herald and The Age’s science reporter Liam Mannix has been nominated in the engagement category after a series of articles which investigate challenging the science behind nerve-pain drugs, ergonomics, and diet pills.