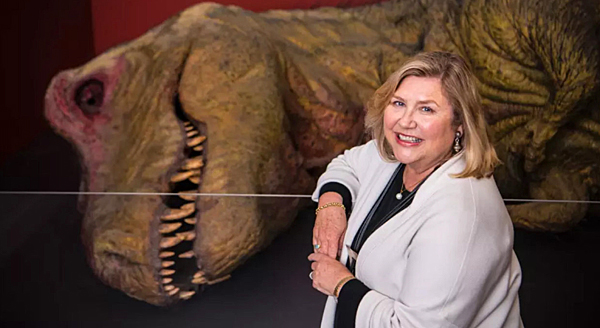 Australian Museum CEO Kim McKay with a T-Rex autopsy installation as part of the Dinosaur Festival ahead of the school holidays. Photo: Wolter Peeters.

Nicole Elphick, ‘A bit gruesome’: Australian Museum autopsy gets to the heart of a T. rex, Brisbane Times, 29 September 2018

Australian Museum CEO and director Kim McKay has a theory on why so many children are absolutely obsessed with dinosaurs. “It’s because they’re almost mythical creatures in a way,” says McKay. “Some children look at them and say have you got a dragon dinosaur? So they’re somewhat mythical, but they know they existed.”

The museum’s popular Dinosaur Festival is back for its third year to keep school holidays boredom at bay while also teaching visitors a thing or two. Youngsters can build their own dioramas inspired by real fossils, make prehistoric creatures out of Lego bricks or watch the documentary Monsters in the Outback to discover more about Australian dinosaurs.

The Dinosaur Gallery has reopened this month after being closed for six months of refreshments to reflect the latest research in palaeontology.

There is one special display that McKay is particularly excited about. “Our big star attraction is the life-size, anatomically correct T. rex model, which cost over $600,000 to build and was donated to the museum by National Geographic,” she says. “It is the most extraordinary sight to see literally what a T. rex looked like.”

Every day visitors will get a chance to view an “autopsy” on the 13-metre beast, who goes by the name of Lizardbeth, and glimpse her enormous heart, lungs, stomach and even ovaries. “It may sound a bit gruesome, but the kids love it.”