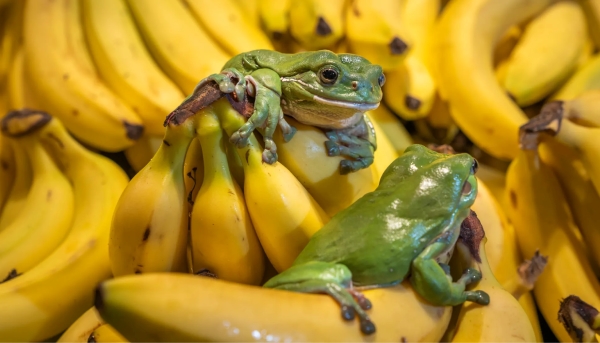 Julie Power, Going for croak: under threat frogs hitchhiking their way back to life, The Age, 1 May 2019

In the past year, the amateur herpetologist has recorded nearly 1300 “verified” frog calls on his phone as part of FrogID, a national citizen project spearheaded by the Australian Museum.

Mr Laidlaw, from Bees Creek, Northern Territory, is one of 6510 citizen scientists who signed up. Together they have recorded 70,000 verified frog calls from about 170 species, a paper to be published in the Herpetological Conservation and Biology on Wednesday.

In one year alone, these frog hunters – using the FrogID smartphone app – recorded the equivalent of 13 percent of frogs entered by scientists and others since colonisation 240 years ago, according to data in the Atlas of Living Australia.

The results are unprecedented, said the museum’s chief executive Kim McKay. “These findings show the incredible impact everyday Australians, with smartphone technology in their hands, can have on scientific research.”

The expert validated geo-referenced data would inform conservation and management decisions while providing vital information about one of the most threatened groups of animals on the planet – frogs, Ms McKay said.

Without accurate data, it was difficult to make conservation decisions, the paper reports.

But in a short time FrogID had allowed herpetologists to collect data on rare and threatened frog species.

Mr Laidlaw said he felt sorry for the frogs, which were eaten by the toads.

“When you look at it [the frogs] compared with a cane toad, they are so soft, so gentle, so susceptible. Cane toads look like a big warrior, four to five times as big,” Mr Laidlaw said.

Avoiding snakes and crocodiles, he records frogs every evening near his home south of Darwin. As he goes, he kills as many cane toads as he can, however he can.

Australia has 240 known species of native frogs, many of which are under threat, said Kathy Potter, amphibian biologist with the Australian Museum and one of the paper’s author.

Frog species have disappeared worldwide and many more were on the edge of extinction.

Declining frog populations are a “warning call” about the impacts of climate change and pollution on Australia’s waterways, wildlife and ecosystems.

“It is so important for us to raise awareness about the need for frog conservation and the challenges involved in protecting not just the frogs themselves, but the habitat they need to survive,” Ms Potter said.

The research also found that Australian green tree frogs that used to flourish – sometimes living 30 years – across Sydney from Mosman to Botany, have virtually disappeared because of urbanisation, dogs and cats. Some had lived until 30 years of age, but now little trace of them remained except on the fringes of Sydney.

But researchers were surprised to find some green tree frogs, and other native species, had established new habitats out of their known range by hitchhiking a ride on the back of fruit and vegetable trucks.

These stowaways established new homes, often to the distress of established species and potentially spreading disease.

The Eastern Dwarf Tree Frog, a stowaway happy to ride with fresh fruit, had moved from Moorabbin, Melbourne. The Graceful Tree Frog, typically native to northern Cape York down to Gosford, had been heard at Flemington Markets in Sydney.

A group called Sloane’s Champions recorded 292 croaks of the small and difficult to detect and threatened Sloane’s Froglet. In one year, they came close to doubling the number of records of this frog detected in Australia.

Dr Jodi Rowley, the lead author of the paper and the Australian Museum’s frog expert, said not all the submissions – all of which were verified by scientists – related to frogs. Some people mistook birds and crickets for frogs.

Most recordings averaged two frogs, but one had 11. “That’s a record so far,” Dr Rowley said.

That only happened in remote areas where it may only rain once a year. “When it does, it is out of control frog heaven. They’re my favourite recordings from the middle of nowhere,” Dr Rowley said.

Each recording was like a specimen and the citizen scientists were making a library of calls.

The new calls were being used in many ways, including building an understanding of how urbanisation was changing the calls of frogs. She said noise from traffic and urban spaces overlap with the frequencies that most frogs call within, making it hard for a frog to be heard.