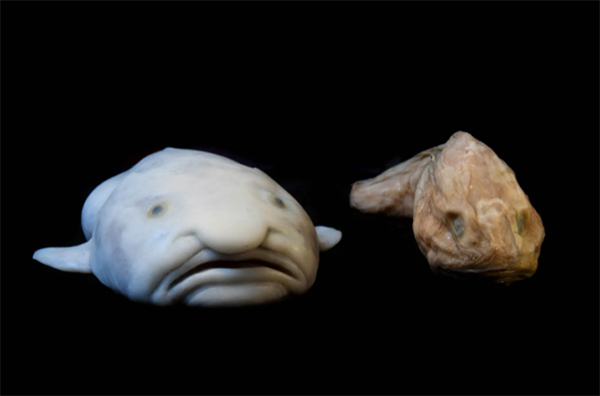 The Australian Museum even had a rubber replica of Mr Blobby created so they’d have something to poke.  Image credit: Dean Sewell.

Angus Dalton, “I try to find the beauty in everything”: Checking in on the fugly fish that broke the internet, Australian Geographic, 28 February 2022

Where is internet sensation Mr Blobby the blobfish now?

It’s Valentine’s Day, and my date is absolutely hideous.

In the tradition of modern romance I’ve already scrutinised his pictures online. He has pale pink flesh with a treacly sheen. His flabby proboscis nose droops over fat downturned lips, and his black eyes are downright rueful. With a whitish parasitic arthropod dangling from the corner of his mouth like a waterlogged cigarette, he looks like a forlorn clown on the world’s saddest smoke break.

But there’s a reason I haven’t stood him up. This creature – a blobfish dredged up from kilometre-deep waters off the north-west coast of New Zealand – is perhaps the world’s most famous fish specimen.

Ichthyology Research Assistant at the the Australian Museum Research Institute Dr Kerryn Parkinson snapped the notorious portrait of the blobfish in 2003 aboard the NORFANZ cruise, a research expedition that trawled deep sea habitats between Australia and New Zealand to discover more about what lurks in our seas beyond the reach of sunlight. 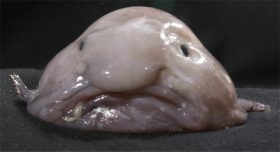 The expedition yielded all manner of fascinating animals, including more than 100 species new to science. But the specimen dubbed ‘Mr Blobby’ became the expedition’s viral star.

Kerryn’s image has been repurposed by the internet in thousands of cruel and creative ways. Mr Blobby birthed the ‘Go Home Evolution, You’re Drunk’ meme. He was voted the world’s ugliest animal in 2013 and became the poster child for the UK’s Ugly Animal Preservation Society. He’s been printed on phone cases, t-shirts, doonas and tote bags. In 2019 Kim Kardashian’s eldest child, North West, sprang from a pink hummer sporting fluffy Mr Blobby slippers.

So where is the famous Mr Blobby now?

Awaiting our rendezvous at the Australian Museum, suspended elegantly in a jar of preservation fluid the shade of date-night Riesling. 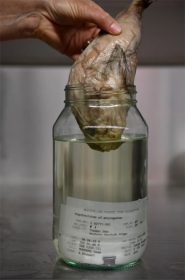 Where is Mr Blobby now? In a jar of preservation fluid the shade of date-night Riesling. (Image credit: Dean Sewell).

“He’s from a family of fish that are known commonly as blobfish, or fathead sculpins,” says Kerryn, unscrewing the jar and clasping her specimen’s tail with long metal tweezers. We’re in the dry lab of the museum’s Ichthyology department, populated by preserved leafy sea dragons, mummified Port Jackson sharks, and a freezer containing a sunfish on ice.

“It was instantly recognisable as a type of sculpin. These guys have a tadpole-shaped body. Their skin is what we would call ‘naked’; there’s no scales and very few spiny protrusions. The area around Australia and New Zealand provides the perfect sort of conditions for this family.

She lifts the fish out of the jar and sets it on a cafeteria-style tray. “He’s pretty cute.”

He’s had a nose job and a facelift. His parasitic lip ring has been plucked away. By the processes of preservation, his pinkish flesh has receded back to its original tadpole shape, and it’s turned pale grey with wrinkles so fine they look like black hairs.

Kerryn explains the fish looked so comical when it was first caught due to the sharp change in pressure from the deep sea to surface level. With a kilometre of ocean water squeezing the blobfish at 100 times the pressure we experience on the surface, there’s no need for a hard skeleton or scales to hold his body together – the sheer force of the water holds the blobfishes’ body in that perfect tadpole shape as they bob along the seafloor.

But at sea level, Mr Blobby melted into the table aboard the NORFANZ cruise, the flesh of his forehead slid down into a ‘nose’ and the corners of his mouth sagged into that iconic frown.

“We just thought it was funny,” remembers Kerryn. “You gotta remember we’d been working 12–14 hour days, every day, for several weeks. So some unexpected things seem incredibly funny in those circumstances.

“He just looked so comical, charismatic and grumpy. Now he’s immortalised in that position. We’d never normally take a scientific image like that.”

Nineteen years later, the preserved Mr Blobby is far more reflective of what blobfish actually look like in their natural habitat. And thanks to footage captured by submersibles, we’re learning more about their behaviour and biology.

“We know they produce eggs and we think they guard their nests,” says Kerryn. “We now know they’re an ambush predator.”

But as with any denizen of the deep, we have far more questions than answers about the blobfish. 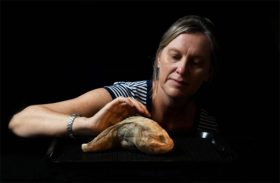 The poster-child of deep sea mystery

“I’d like to know if it was a male or a female,” says Kerryn, looking down at, possibly, Mrs Blobby. “And I’d love to know how old. This guy could be 50 years old; we just don’t know.”

Both questions would require dissection to answer – and no one’s planning to split the internet’s most notorious fish specimen down the middle any time soon. Kerryn says that they’ve identified Mr Blobby as Psychrolutes microporos, a species endemic to New Zealand first caught in 1914 on the Endeavour research expedition. But there’s a chance he could be a whole different, new species – we just lack the data and specimens to be sure.

This data deficiency makes it difficult to establish the conservation status of blobfish, too. People often assume them to be endangered – an unsubstantiated claim perhaps driven by a satirical ‘Save the Blobfish’ advertising challenge on The Gruen Transfer in 2010 – but the truth is we just don’t know.

What we do know about most deep sea creatures is that they’re incredibly specialised to one of the most extreme habitats – cold, pitch black – on the planet, so the impact of climate change is a major concern.

“We can’t say if they’re rare or endangered. To manage something, you need to know about them,’ says Kerryn. “I know Australians love the coast and we all live within a relatively short distance of it, but the number of species we see are restricted to that fairly small area. Getting really deep, and really far out, isn’t a priority.”

The problem highlights how valuable and rare deep sea biological research expeditions such as the NORFANZ cruise are. Along with scores of new species, the trip yielded fascinating specimens such as the gulper eel (the whole creature is essentially a giant, ravenous mouth propelled by a thin tail), coffinfish (an angrier, veinier blobfish), along with black seadevils, spookfish, giant sea spiders, nautilus and the fossilised tooth of a megalodon shark. With every creature captured, photographed and preserved, we inch closer to a better understanding of deep sea biodiversity. 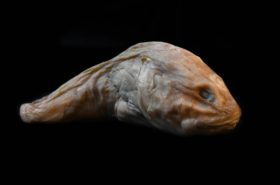 Mr Blobby could serve as a key specimen for deep sea ichthyology researchers in the future. (Image credit: Dean Sewell).

“It was a one-of-a-kind expedition. If we had all the time and money in the world we’d have a NORFANZ cruise every year,” says Kerryn. “But it’s so laborious to get down there and find this information. It’s the equivalent of going to Mars. But we’ll get there as the technology improves.”

For now, Mr Blobby is emblematic of the tantalising mystery of the deep sea, the crucial work of museums, and the importance of conservation for all creatures great, small and disturbingly Trump-like. He’s been on display in the museum to the horror and delight of school kids. The museum even had a rubber replica of Mr Blobby created so they’d have something to poke.

Kerryn hopes that Mr Blobby could serve as a key specimen for deep sea ichthyology researchers in the future, alongside the 500,000 other specimens preserved by the museum’s fish collection, the largest in the Southern Hemisphere.

“He’ll be preserved forever like this,” she says. “He’ll be compared and contrasted with new specimens for years to come. We’ve got fish here from the 1800s – this is why we have museums.”

As Kerryn slips the specimen back into his jar, I ask if she agrees that this wet, wrinkly creature that broke the internet is indeed the ugliest animal on Earth.

“No. How can you say that? Even if it doesn’t look as pretty as a fairy wrasse, you’ve gotta appreciate what an amazing being this is. It can live down deep, now we know that it guards nests… it’s just incredible that it can adapt to an environment like [the deep sea]. Charismatic is the word.”

I press her for an alternative nomination.

“I try to find the beauty in everything natural,’ says Kerryn. She pauses. “But I’m sure there are some pretty ugly hairless cats out there. Let’s go with that.”