How does a 190-year-old research icon remain relevant? Just ask the Australian Museum. Director and CEO (and UTS Luminary) Kim McKay AO reveals how, as the museum celebrates its 190th anniversary, it continues to engage with and involve the public, and why community participation is so important. 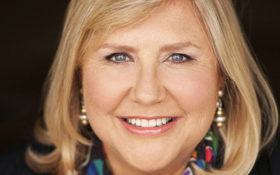 Scientific research institutes tend to be, by nature, inward-looking and often solitary in the work they do. My perspective has always been from the public engagement side – how can we be ‘social’ scientists working to engage the community?

In my role at the Australian Museum I bring a very generalist and outward-looking perspective; one based on how you can effectively communicate science to the public and involve them.

It’s perhaps no surprise; my background is in communication – I graduated from UTS in 1981 with a Bachelor of Arts (Communication), co-founded Clean Up Australia in the 1990s and, since 2014, have been part of the UTS Vice-Chancellor’s Industry Advisory Board (among other things).

In my experience, the way you change public opinion or influence people’s belief systems, and change behaviour, is through participation. Once you have actually participated in something you have a whole different perspective and understanding.

At the Australian Museum, and with IBM’s assistance, we’ve been developing a citizen science initiative related to frogs. The initiative will launch later this year as part of our 190th anniversary celebrations. Through it, we hope to see 500,000 citizen scientists, not just 10 to 20 scientific experts, working in the field to gather data about the 250-plus frog species living in Australia. It’s an incredibly exciting project!

At the more extreme end, the museum recently enlisted experienced climbers to help our scientists scale Ball’s Pyramid – the incredible, spikey volcanic spire sitting out in the middle of the Tasman Sea 20 kilometres from Lord Howe Island. It’s also the only known home of the rare Lord Howe Island Phasmid, once thought to be extinct.

The live specimens the scientists and climbers collected have since been sent to Melbourne Zoo to join a breeding program. The plan is to reintroduce them to their native home sometime in the near future. It’s exactly the sort of thing I want to do more of at the Australian Museum.