You are here: Home » Articles filed under: 'News' » Article: 'AM’s renovations give Scotty room to roar' 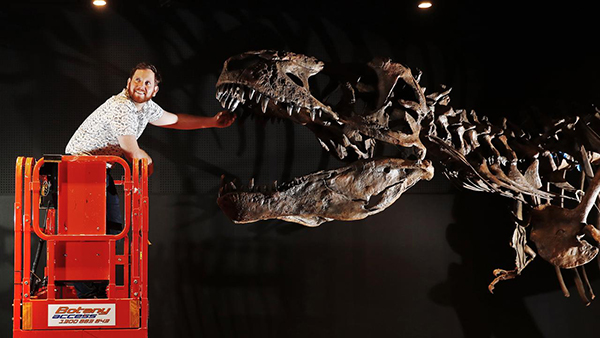 The Australian Museum reopens next Saturday after a $57.5 million renovation, and it’s all hands on deck to have the spectacular dinosaur exhibition ready on time.

Henry Sisley is making loud buzzing sounds with his power tool as he secures the massive, clawed feet of Scotty the tyrannosaurus rex to a large wooden plinth.

Behind Sisley, a cleaner heroically vacuums a floor that’s almost the size of an Olympic pool.

Cow-sized wooden crates lie about half open, allowing tantalising glimpses of strange creatures from another time in earth’s history.

“Don’t go tramping black paint all over my new floors,” growls facilities manager Glenn Murray as another staffer stands on a dropsheet inside the big new subterranean exhibition hall at the Australian Museum in College Street, Sydney.

Murray is only being mock cranky. There’s an air of what you might call frantic high spirits tempered with an overlay of scientific calm as everyone from cleaners to scientists pitch in to prepare the Australian Museum to receive its first visitors next Saturday after a 15-month, $57.5 million, transformational building job. 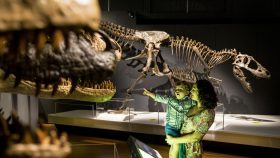 A young dinosaur fan gets a sneak peek of the new exhibit.

Now boasting large new exhibition areas, a new cafe, a new shop, new panoramic views across the city in the direction of St Marys Cathedral, and a general opening up of its rabbit warren of interior spaces, the grand sandstone lady of Australian natural history and culture is not only almost back in business, it will be free for all to visit for the first time since admission fees were introduced in 1992.

Visitors will barely recognise their beloved institution, which was founded in 1827.

The commercial imperative to carve out a new touring exhibition hall to enable to museum to accommodate even the biggest objects was the real driving force behind the building project, dubbed Project Discover.

And museum objects don’t come much bigger than Scotty, the cast of a 12m T. rex skeleton discovered in Saskatchewan, Canada. 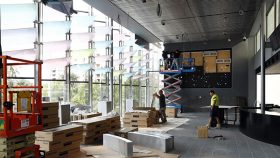 The $57.5 million transformation has opened up the museum. Picture: Sam Ruttyn.

Scotty is the undoubted eye-popper in the museum’s major reopening exhibition, Tyrannosaurs — Meet the Family.

Scotty represents one of the biggest T. rex specimens ever discovered, but there’s lots more to see.

There are life-size models of Dilong and Guanlong (early, small, feathered relatives of T. rex discovered in China), a cast of a Velociraptor skeleton, and a wall of fossil skull of bone-crunchers like Appalachiosaurus and Tarbosaurus.

There are fossil casts of the newly discovered, 78kg lightweight moros intrepidus, found in Utah, and specimens of tyrannosaur eggs, the bones they once gnawed on, and casts of coprolites (dino dung).

At the entrance to the exhibition is an augmented reality display in which dinosaurs run through the streets of Sydney. 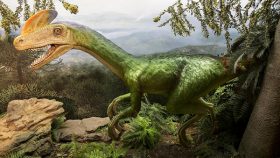 The exhibits are scarily lifelike. 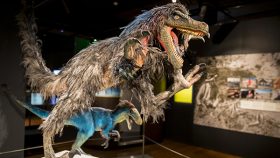 The feather-covered dilong is fluffed and ready for the big reveal.

While visitors will pay for a ticket to see Tyrannosaurs — Meet the Family, the rest of the museum can be enjoyed for free.

The Australian Geographic Nature Photographer of the Year exhibition (admission free) will also be on view, and the museum’s permanent collection areas such as the stunning Westpac Long Gallery and Wild Planet will all be open.

Tyrannosaurs — Meet the Family has stepped in to the museum’s new touring exhibition hall after COVID-19 disrupted museum plans to reopen with the globally travelling blockbuster exhibition Tutankhamun, Treasures of the Golden Pharaoh.

King Tut is now postponed to a date to be announced, resulting in the museum pulling back its touring tyrannosaur show from Edinburgh Museum where it was being displayed before COVID put the Scottish museum into lockdown. Not even Edinburgh Museum staff were allowed back in.

“We were trying to get [the show] back here for our opening, which we managed to do in the end but it was getting very, very tight,” Fran Dorey says. 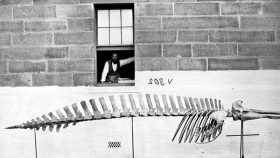 In this early picture of the museum, Gerard Krefft leans out of a gallery window above the newly prepared skeleton of a beaked whale. Picture: Henry Barnes.

Dorey created Tyrannosaurs — Meet the Family for its first outing at the Australian Museum in 2014. The show has been updated for its new outing here. In six short years, the tyrannosaur family tree has changed quite a lot. New discoveries have been made, and the family tree in the exhibition has been adjusted accordingly.

New names on the tree include thanatotheristes degrootorum, discovered last year in North America and dating to about 80 million years ago and related quite closely to T. rex, Dorey says.

Then there’s jinbeisaurus wangi, found this year, significantly smaller and lighter at just five metres long, and dating to between 95 and 72 million years old.

Tyrannosaurs emerged about 160 million years ago, at which time they were small and often feathered. 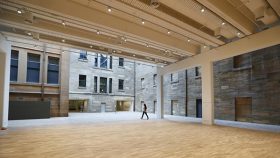 “These early ones generally had three fingers on their arms and they stayed quite small up until about 80 million years ago when you start to get ones that are about eight metres appearing,” Dorey says.

“So for most of their history, almost 90 million years, (tyrannosaursT are not your large, top-of-the-tree predators, these are small predators running around being dominated by bigger predators.”

The last tyrannosaurs died 66 million years ago when a meteorite hit the earth, possibly after the animals had already been weakened by other events.

“There was volcanic activity happening at that time, which would have had quite an impact,” Dorey says.

Getting back to Scotty, which the museum purchased especially for the 2014 iteration of its show, it’s a cast of one of the biggest Tyrannosaurus rex skeleton specimens ever found. 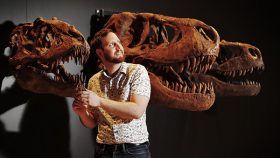 The museum will reopen to the public on November 28. Picture: Sam Ruttyn.

After roaming around the exhibition and seeing the casts, authentic fossils and other fascinating objects, young visitors can enjoy the new play and education areas opening at the museum for the first time next Saturday.

Prehistoric Playground on level 2 will offer activities such as Scientist for a Day where children learn about palaeontology through a range of hands-on activities. They can also design their own dinosaur and see it projected on the wall.

For museum palaeontologist Dr Matt McCurry, the exhibition allows visitors to receive an understanding of the diversity of tyrannosaurs that once existed.

“With all of the different tyrannosaur fossils that we find around the world, we are starting to build a picture of how they evolved, what each of the animals fed on, how they lived, to give us this general understanding of this group as a whole,” Dr McCurry says.

Meanwhile, like other museum workers, he’s just trying not to get the new floor dirty.