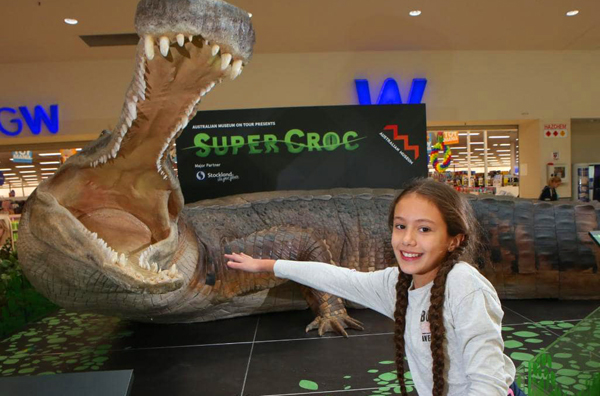 Nastasia Grima, from Prairiewood, gets close to the supercroc, model of the Sarcosuchus Imperator. Pictures: Robert Pozo.

An 11m super crocodile is all the rage at a Wetherill Park shopping mall as the Australian Museum brings one of world’s heaviest and biggest prehistoric reptiles to Fairfield.

The Stockland mall has been transformed into a prehistoric swampland with a helping hand from Australian Museum and its lifelike model of SuperCroc whose ancestor was known as the Sarcosuchus imperator.

It was one of the all-time largest crocodiles, ranging between 11m and 12m in length and weighing about eight tonnes — as heavy as a fully grown male elephant.

The model was built by palaeontologists and scientists for the National Geographic documentary, SuperCroc.

“Visitors to Stockland shopping centre are certainly in for a treat when they encounter SuperCroc, the 11m long ancient African monster which is still clearly bigger than any croc known to have snapped its jaws in Australia,” Australian Museum’s CEO and director Kim McKay said.

Visitors to Stockland Wetherill Park will also have the chance win a family trip for four to the Northern Territory for a real life crocodile experience.

SuperCroc will be at the centre until Wednesday, August 1.