You are here: Home » Articles filed under: 'News' » Article: 'AM’s Treasures a labour of love'

AM’s Treasures a labour of love 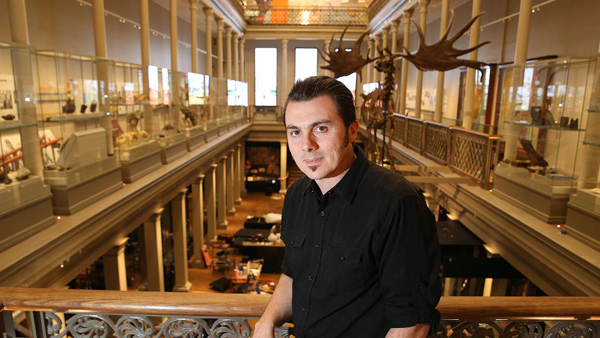 Aaron Maestri can still remember the childhood outings when his grandparents would take him to visit the Australian Museum.

Maestri’s grandfather Len Barton would enhance the experience with little stories about the exhibits they saw.

“There was a dingo in the mammals gallery, and he told me that it used to be his dog,” Maestri says.

Len was an antique dealer of Paddington and later Mosman, and he and Alma were scholarly and academic.

“I’ve never had a chance to tell anyone how important in my career they were,” Maestri says.

The Bartons would certainly be thrilled to know their grandson has not only worked at the Australian Museum for many years, he is also the designer of the 200 Treasures of the Australian Museum exhibition within the newly-unveiled Long Gallery in the historic sandstone building on William Street.

The project to refurbish the Long Gallery and install the new exhibition cost $9 million.

The Long Gallery is notable as Australia’s first museum gallery, its grand scale showing the importance placed on science in the then colony of NSW.

The glitterati who attended last night’s gala opening of the Long Gallery and its new permanent exhibition probably assumed a fashionable design firm had been brought in to make the exhibition so elegant.

In fact, the designer was much closer to home.

While heritage architect Alan Croker conducted conservation and restoration work, Maestri who designed the exhibition. He worked from his tiny, shared office which is reached via a rabbit warren of corridors at the rear of the Museum.

When Maestri first heard that museum director Kim McKay had plans to refurbish the Long Gallery, which was looking old and tired, he approached McKay for permission to work on the project.

“I’ve wanted to get my hands on this gallery for years,” Maestri says.

“So I was very lucky that she was happy to let me have a go at it.”

By then, Maestri was well qualified for the job.

He had already done an exemplary job on the Australian Museum’s Wild Planet gallery which opened in 2015.

And he had worked on the project to rebuild the Islamic galleries at the Metropolitan Museum of Art in New York.

While living in America for 10 years, he had also been hired to work on the creation of the Disney Family Museum in San Francisco, becoming friends with the Disney family along the way.

After Kim McKay said yes to him working to design the 200 Treasures exhibition for the Long Gallery, Maestri would spend two years bringing the project to fruition. No detail was too small for his critical eye.