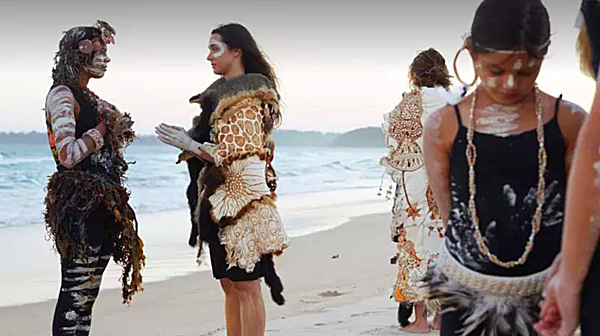 Australia’s Aboriginal people were the first known astronomers, the world’s first known bread makers and pioneered ground-edge axe technology – but you wouldn’t know it from most historic accounts of early white settlement.

“People didn’t walkabout,” McBride said. “That’s a myth. People moved systematically from place to place for a reason, be it for marriage ceremony or for trade. This country here, Gadigal country, had several large ceremonial sites where people would come from all over.

”What they like to do with us in history is make us savage or mystery. Not only is there a lack of information about the Aboriginal people, there is highly enforced false information. The teaching is not the hardest part – it’s the undoing of what has been learnt from a very young age for a long period of time.”

Thursday’s launch marks the release of the institution’s Aboriginal and Torres Strait Islander Strategy for 2017-2020, giving Indigenous people a greater say in the way they are represented.

The festival’s centrepiece exhibition introduces visitors to the Gadigal people, original custodians of the land on which the museum stands.

For Gadi, McBride sourced three wall-sized images from the collection of Russian watercolourist, Pavel Mikhailov, whose natural ethnographic portraits and harbour views captured the beauty of Port Jackson in 1820.

The shields Gadigal elders carried, Uncle Allen said, were primarily ceremonial, decorated so that one man could identify the other. And the boomerangs? Intended to fell animals, 95 per cent didn’t return.

On Sydney Harbour, Gadigal fisherwomen would nurse babies while they’d fish in canoes, cooking their catch on fires built of clay bases that burned on the canoe floor. For the festival, master weavers Phyllis Stewart and Steve Russell will create a four-metre canoe to form a sculptural tribute to Indigenous fisherwomen.

Other events include meditation with Wiradjuri cultural practitioners and screenings of Carriberrie, a 360-degrees virtual reality experience of Indigenous stories, songs and dance.

The Gadigal were named after the grass tree, the Xanthorrhoea, that grew in abundance in Sydney Cove at the time of settlement, and whose stem was used in the making of spears.

Visitors will be introduced to the Gadigal language including the greeting, budjari gamarruwa, meaning good day. McBride thinks it sad that most Australians are familiar with the French equivalent but clueless to the founding Indigenous language.

“Bugi means bark and bagi means skin,” McBride said. ”The Gadigal people have a linguistic relationship between what we see as our skin and the skin of a tree. The tree is very important. The tree should not be cut down, the tree should be respected. Because you cannot separate Aboriginal people from country, the destruction of country from the very beginning caused immense distress.

To the Gadigal, Biame was the world’s creator. “He came this way on a comet and when he stepped from the heavens he stepped onto a place up in the Hunter,” Uncle Allen said. “He was our creator, our seas, our mountains and the black fellows have always being looking to the heavens. The heavens were used to get us across country.”