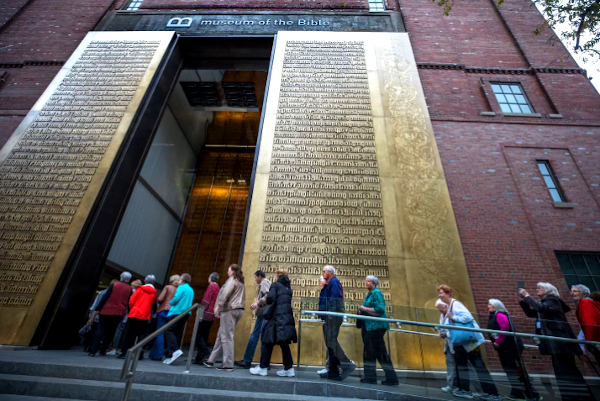 Tourists from Purpose Driven Tours enter the Museum of the Bible in Washington in December 2017. (Evelyn Hockstein for The Washington Post).

Since 2012, scholars and University of Oxford officials have been trying to trace a rumor that the oldest Bible fragment ever discovered not just existed but had been mysteriously stolen and sold to American arts-and-crafts giant Hobby Lobby.

Now, officials said they have finally cracked the case. The suspected thief at the center of the biblical controversy? Professor Dirk Obbink, one of the most celebrated classics professors in the world, a Nebraska native and MacArthur “genius grant” recipient who had long directed — and allegedly looted — Oxford’s Oxyrhynchus Papyri Project, a collection of centuries-old literature recovered from an ancient Egyptian garbage dump in 1896.

On Monday, officials from the Papyri Project released the results of a three-month probe into Obbink and accused the acclaimed professor of taking and selling at least 11 ancient Bible fragments to the Green family, the Hobby Lobby owners who operate a Bible museum and charitable organization in Washington.

The Egypt Exploration Society, a nonprofit that manages the Papyri Project’s collection of ancient literature, and the Museum of the Bible explained their findings in statements shared with The Washington Post.

“The [museum] has informed the EES that 11 of these pieces came into its care after being sold to Hobby Lobby Stores by Professor Obbink,” the nonprofit said in a statement Monday.

Obbink, who is still a professor at Oxford, hasn’t responded to the claims and didn’t immediately respond to a message late Monday from The Washington Post. He has previously denied some of the allegations, telling the Daily Beast in 2018 that the claim he sold the fragment of the first chapter of the Gospel of Mark to Hobby Lobby “is not true.” An Oxford spokesman confirmed to The Post that it is working with the Papyri Project and conducting its own investigation. The Green family and Hobby Lobby did not respond directly to The Post late Monday, but a museum spokeswoman said Hobby Lobby bought the artifacts “in good faith.”

Early copies of the New Testament are very rare. The oldest, nearly complete copy dates to the 5th century, and most substantial manuscript fragments come from no earlier than the 3rd century. Obbink was a decorated scholar who studied these earliest iterations of the Bible and headed the Papyri Project from 1998 to 2016.

In February 2012, speculation spread that the oldest known biblical fragment had been discovered and examined by a small and tight-lipped group of scholars and artifact dealers. Those who had seen it couldn’t say much about the “First-Century Mark.” They all described the text as the first few verses from the Gospel, which was allegedly recorded in the first 100 years after the birth of Jesus. The lucky few who claimed to have laid eyes on the rare and invaluable artifact said they were bound by nondisclosure agreements to keep secret the identity of the Mark’s owner.

For many prominent religion scholars, the NDA may as well have been a name tag. Only the Green Collection required scholars to sign the agreements at the time, the Daily Beast reported earlier this year. Steve Green, the president of Hobby Lobby who amassed one of the largest private collections of biblical artifacts in the world in just 10 years, even hinted that the fragment might be part of his massive archive. “At some point it was like, this is an item I want to pursue,” he told the authors of “Bible Nation,” when they asked the crafting mogul what he knew about the “First-Century Mark” while researching their 2017 book.

Scott Carroll, who served as director for the Green Collection, publicly said he’d first seen the fragment in late 2011, laid out on a pool table in Obbink’s Oxford office among classical busts and Egyptian funerary masks. He refused to say who owned the verses or whether he’d helped Green buy them.

The existence of the ancient Bible passage and its possible owner remained a frustrating mystery for nearly six years, until the Egypt Exploration Society published a suspiciously similar fragment from the Gospel of Mark in June 2018. But the ancient Bible story the university published dated to the late 2nd or early 3rd century and had never been for sale, the nonprofit said. The Egypt Exploration Society acknowledged the fragment it published was probably the rumored and ill-named “First-Century Mark,” but denied ever asking researchers to sign an NDA.

“Professor Obbink insists that he never said the papyrus was for sale,” the Egypt Exploration Society said at the time, “and that while he did receive some payments from the Green Collection for advice on other matters, he did not accept any payment for or towards purchase of this text.”

That story slowly began to dissolve under scrutiny, officials say. Nearly a year later, the Museum of the Bible, Green’s pet project in Washington, where he displays many items from his biblical collection, shared documents that appeared to show that Obbink had sold the Mark fragment and three other ancient Bible pages, to Hobby Lobby Stores in 2013. In the sales agreement, Obbink had been permitted to retain possession of the fragments for research purposes.

In June, the Egypt Exploration Society opened an investigation, in partnership with the Bible museum, to suss out what had happened. The nonprofit banned Obbink from accessing the Papyri Project archives. Oxford also opened its own investigation into the allegedly fraudulent sales.

After investigating its collection, the Egypt Exploration Society announced on Monday that it had found at least 13 other Bible fragments had gone missing.

The Egypt Exploration Society “is also pursuing identification and recovery of other texts, or parts of texts, which have or may have been illicitly removed from its collection,” the nonprofit said in a statement Monday.

Obbink allegedly swiped the Bible fragments, which include passages from Genesis, Psalms and an ancient copy of the Ten Commandments, in 2010, when Green was in the early years of building his private collection. The catalogue cards and photographs of the texts also disappeared from the Oxford collection.

“The items referenced were acquired by Hobby Lobby Stores in good faith between 2010 and 2013, but sold by a known expert from Oxford University,” a Museum of the Bible spokeswoman said in a statement shared Tuesday with The Post.

The Bible museum said Monday it will return the fragments to the Egypt Exploration Society, which will store them once again on the Oxford campus.

The controversy over the illicit Bible fragments is hardly the first for Steve Green and his museum.

The rare-manuscript world “is sometimes seen from the outside as seedy,” Carroll told The Post in 2014, during the construction of Green’s museum. Since its opening, the museum and its founder have run into several mishaps involving illicit artifacts.

In 2017, federal investigators announced that they had been probing Hobby Lobby after the company illegally purchased thousands of ancient cuneiform tablets and clay bullae stolen from Iraqi archaeological sites. The company eventually settled with the Justice Department and agreed to pay a $3 million fine and return all of the illegally imported artifacts to Iraq.

The Museum of the Bible removed five prominently featured segments of the Dead Sea Scrolls in October 2018 after a Trinity Western University researcher told the institution he suspected at least seven of its scroll fragments might be “modern forgeries.” Fragments from the Dead Sea Scrolls would be from the oldest-known copy of the Hebrew Bible.

In a statement provided to The Post on Tuesday, museum spokeswoman Heather Cirmo said the Bible fragments that belong to the Egypt Exploration Society came to the museum before it adopted a more robust set of policies for assessing the provenance of artifacts in 2016.

“Former employees who have not been associated with the museum since 2012 made the decision” to accept the 13 Bible fragments, she said. “Since then, Museum of the Bible curators and registrars began rigorously reviewing all acquisitions and researching documentation and dealers, with special attention on antiquities, items that may originate in modern conflict zones, and agents who are now known to [have] sold items of questionable origin or authenticity.”