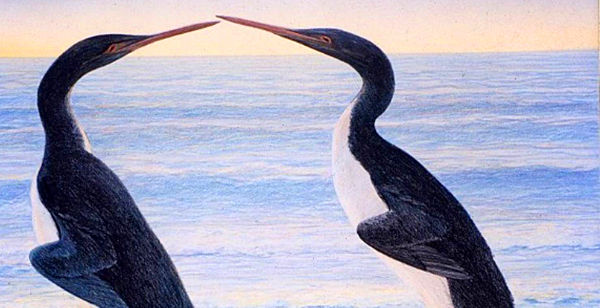 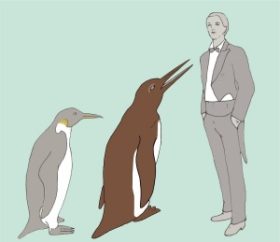 Penguins are much older than previously thought and their evolution probably dates back to the days of the dinosaurs, according to research on the fossilised leg bone and toes of a giant ancient penguin found in rocks near Waipara, North Canterbury.

The scientists estimate the enormous penguin stood about 150 cm tall (the size of a small adult human). The new find is one of the oldest penguin fossils in the world dating back to 61 million years ago. The bones differ substantially from previous penguin finds of a similar age and show that the variety of Palaeocene penguins, living between 66 and 56 million years ago, was greater than previously thought. This diversity indicates that penguins started to evolve quite early, likely during the late Cretaceous period (the era of the dinosaurs).

Dr. Mayr, the lead author of the study, says: “Penguins had reached enormous proportions early on in their evolutionary history and were already more diverse 60 million years ago than we had previously assumed. This diversity indicates that penguins probably evolved during the ‘Age of the Dinosaurs’ more than 65 million years ago.”

Professor Scofield says that Canterbury’s Waipara River is renowned for its rare but well preserved bird fossils which were deposited only 4 million years after the extinction of the dinosaurs. “We have found turtles, many species of shark, giant fish, two types of flying birds and two species of a penguin-like bird named Waimanu, considered to be the oldest fossil of any group of birds living today. Until now it had been assumed that Waimanu was the only penguin alive during this time.”

Dr Vanesa De Pietri, a co-author of the study, adds that “The fossilised lower leg bone is very different from that of Waimanu, both in proportions and anatomical detail. Looking at this and the toe bones of the newly-discovered penguin we think it also walked differently from the cormorant-like gait of Waimanu. The larger penguin was already waddling like the penguins we see today.”

To cite this paper: Mayr, G, De Pietri, VL, Scofield RP 2017. A new fossil from the mid-Paleocene of New Zealand reveals an unexpected diversity of world’s oldest penguins, The Science of Nature