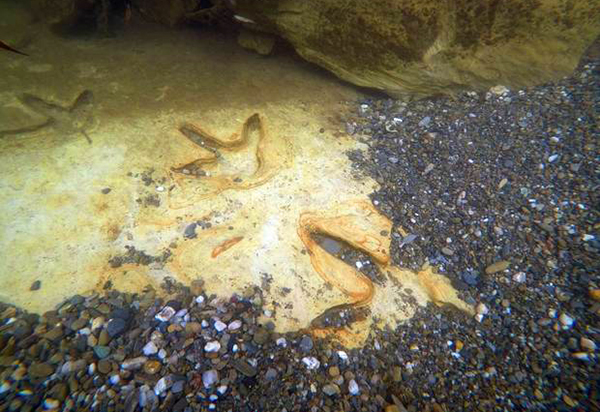 Eleanor Barker, Ancient moa footprints found underwater: When can you see them?, NZ Herald, 13 May 2019

Seven ancient moa footprints have been discovered at the bottom of a river in Maniototo.

Ranfurly man Michael Johnston was cooling off with his dogs in a local swimming hole when he made a discovery of international significance; a series of fossilised moa footprints millions of years old.

The footprints are the first moa prints to be found in the South Island and a “glimpse into the past before the ice age”, said Professor Ewan Fordyce of the University of Otago’s department of geology.

When can the public see the tracks?

People who wish to witness the amazing discovery for themselves may only have to wait a few months for the hotly anticipated temporary public display of the Ranfurly moa tracks at Otago Museum.

Otago Museum Director Dr Ian Griffin says his team are still in the process of trying to figure out how best to preserve the footprints.

“There will be a lengthy process to safely dry them and ensure that both the footprints and the clay substrate remains stable.

“A project such as this demonstrates the importance of regional museums having skilled scientists on staff and being able to cultivate the relationships with world-class researchers so we can respond to this incredible find so quickly, and effectively.

“I will be pushing the team to get them on display as soon as we can. However, we won’t do that until we are sure they are in a stable condition.”

What moa specimens can be seen now?

Otago Museum holds the world’s largest and most complete collection of moa specimens in the world and has an excellent collection on display in their Southern Land, Southern People gallery including 10 articulated moa skeletons. They also have two out of the three known complete moa eggs in the world in their collection.

Whanganui Museum
Whanganui Museum has an excellent moa gallery that is one of the most important in the world. This is because many fossils were found in the local area and were not traded or dispersed as happened in other areas of New Zealand. This has allowed scientists to study an entire community of moa trapped in the swamp over thousands of years.

The museum also holds a complete and intact moa egg, found in 1931 by workmen excavating a cliff at Waitotara. It is one of the few intact and complete moa eggs known in the world.

Auckland Museum
Auckland Museum’s iconic female moa construction is over a hundred years old, although it does reflect a more naive understanding of the posture of the ratite birds; scientists now believe the moa’s neck looped down to form an “S” with the body.

Canterbury Museum
Canterbury Museum has been at the forefront of the study of moa since the Museum’s inception and holds a large collection of moa bones. A moa skeleton is mounted in the foyer of the museum.

Te Papa
A priceless 700-year-old moa egg, one of only 36 mostly-intact eggs in the world, will be at the heart of Te Papa’s brand new $12 million nature zone. Known as Te Taiao Nature, the zone will feature more than 1200 collection items, along with dozens of interactive experiences, including an exhibit where you can weigh in against a giant moa.

DNA-based studies have blown away our understanding of moa evolutionary history and challenged our ideas around the arrival of iconic species in New Zealand.

For example, for decades it was believed that ratites, including moa, were the perfect example of “vicariant speciation” i.e. scientists assumed moa and kiwi would be each other’s closest relatives as a result of their long isolation after the supercontinent of Gondwana broke up. 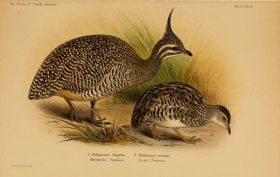 Incredibly, when you compare the timing of the breakup of Gondwana and the age of these relationships the only way this scenario could have occurred is if both moa and kiwi at some stage developed a Kiwi can-do attitude and flew to an ancient New Zealand landmass, later becoming flightless. 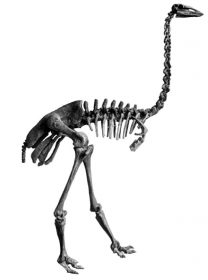