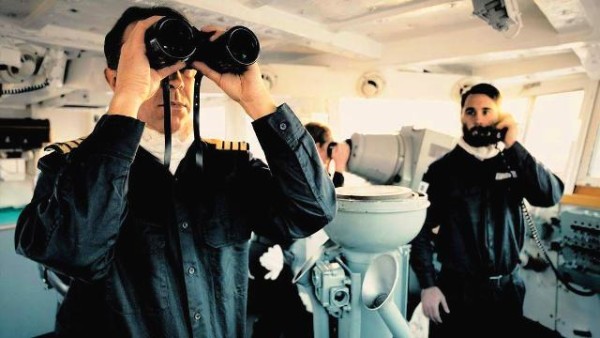 A scene from our Immersive Cinema Experience: the Captain of HMAS Vampire and his crew in action on the Bridge.

The $12 million Action Stations is the biggest public initiative the museum has undertaken since it was founded.

Kevin Sumption director and CEO of the ANMM has overseen the release of its first-ever movie trailer, giving a tantalising glimpse of the attraction which will see its ex-navy submarine and destroyer brought to life like never before.

An internationally recognised expert in digital cultural content, Sumption was appointed in 2012 to create a museum that encourages visitors to explore, discover and experience maritime science and history.

“The ANMM is not a conventional maritime museum. It is a more exciting place to learn about Australia as an island nation as we have recast the story of the sea to create a balance between science and ships. With 95% of our population living near the sea, we have lost the connection that fundamentally we are still a nation of the sea,” Sumption says.

Action Stations features a dramatic immersive cinematic experience, a new discovery and exploration space and audio-visual encounters that recall sailors’ memories on board the vessels and give visitors new insight into the inner workings of navy life at sea.

Filming took place in June with the support of the Royal Australian Navy. More than 60 current naval servicemen took part as extras, dressed in 1970s-themed uniforms. And again with the help of the navy, at-sea footage was filmed on board HMAS Darwin.

Audiences can view a sneak peek of the cinematic experience via a dedicated Action Stations website. Here users can also learn more about Action Stations, book tickets in advance and even share their stories if they served on one of the museum’s navy vessels.