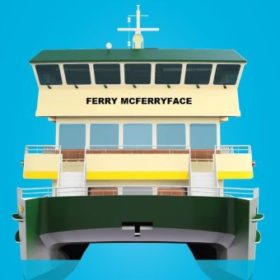 Ferry McFerryface is now officially the name of the last ferry in a new fleet of inner harbour vessels.

The name was voted on by hundreds of Sydneysiders in a competition which allowed the public to be part of maritime history.

However, the most votes actually went to the name Boaty McBoatface, the notable title Brits voted to call a new research vessel last year.

But Minister for Transport and Infrastructure Andrew Constance said they wanted to avoid a double up.

“Given Boaty was already taken by another vessel, we’ve gone with the next most popular name nominated by Sydneysiders,” Mr Constance said.

“Ferry McFerryface will be the harbour’s newest icon, and I hope it brings a smile to the faces of visitors and locals alike.

More than 15,000 suggestions were made in the Name Your Ferry competition and three of the six new ferries have already been picked by voters: Victor Chang (Australian heart surgeon), Fred Hollows (ophthalmologist) and Catherine Hamlin (obstetrician).

The new fleet has capacity for about 400 customers, improved accessibility for people with disabilities, wi-fi access, luggage and bicycle storage areas and charging stations for electronic devices.