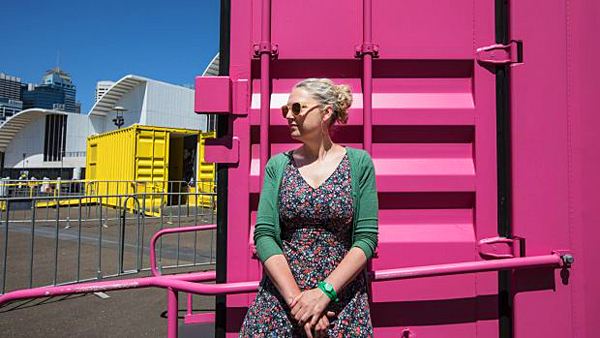 Curator Mary Elizabeth Andrew stands next to one of the six boxes which are part of Container, the Box that Changed the World at the Australian National Maritime Museum. Photo: Jessica Hromas.

Who doesn’t love cheap beer? It was the chance to make money by selling beer to consumers at 6 per cent of the previous cost that partly motivated a millionaire North Carolina trucker called Malcolm McLean to pioneer the use of containerisation, wrote economist Marc Levinson.

As a young trucker, McLean watched and fumed as truck loads of goods would take more than a week to be broken down, and repacked on cargo ships. Called break bulk, it was slow, back-breaking work done by hand. His bright idea was to put everything in a box which could be lifted in one go from truck to ship and to truck at the other end.

The impact of using containers to ship by sea has been likened to the impact of binary code on modern computing. Today, 539 million containers are shipped every year from the top 100 ports, many of which didn’t exist when McLean started dreaming around 80 years ago about a faster cheaper way to move goods.

There is no beer in the six containers at the Australian National Maritime Museum that house a new exhibition, Container: the Box that Changed the World, which runs from 26 October 2017 to 4 July 2018.

But there is a living/dining room with pancakes topped with strawberries sitting on a Freedom table, a couch that comes from a popular chain, several lamps, a rug, books and other materials.

Using actual sailing schedules for container ships, curator Mary-Elisabeth Andrews calculated that this small room’s worth of goods had travelled two-and-a-half times the distance from the Earth to the moon.

Few people understood the distances travelled by everyday items, said Dr Andrews, who went beyond the labels on goods to find out where things really come from.

“The eggs, butter, milk, sugar and flour are all produced locally,” she said.

“But the vanilla essence and bicarb soda put in some rather large distances. The vanilla would have come from Madagascar, and the bicarb soda was mined in Canada, and synthesised in China,” she said.

The wood of Freedom table was from the Appalachian mountains in the USA, while the MDF was from Vietnam.