You are here: Home » Articles filed under: 'News' » Article: 'ANMM Escape from Pompeii' 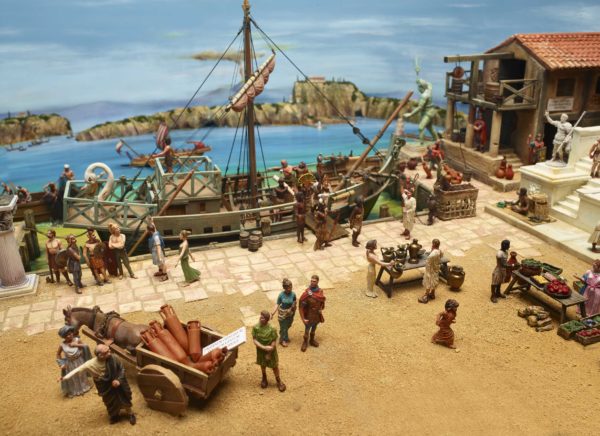 Misenum in miniature. An up close look at the diorama created by Geoff Barnes and Roger Scott for Escape from Pompeii. Image: Andrew Frolows / ANMM. 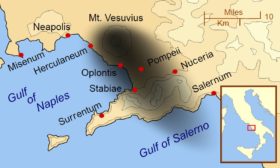 The cloud in the map above represents the distribution of ash and cinders from the eruption of Mount Vesuvius in 79 AD. Image: MapMaster, via Wikipedia.

In 79 AD Mount Vesuvius erupted, sealing nearby Pompeii and Herculaneum into time capsules that would not be reopened for many centuries, and which have been incredibly rich historical and romantic resources for today’s world.

The eruption was clearly visible from the Roman navy’s major port-city of Misenum, along the coast at the northern end of the Gulf of Naples. In response, the admiral of the fleet, Pliny the Elder, ordered his ships to go to the rescue. It is one of the first recorded attempted rescues of civilians by sea by a military force.

The Escape from Pompeii opens at the museum on 31 March. The exhibition reveals how the Roman navy came to dominate the Mediterranean, and how the Roman empire’s sea trade made it so spectacularly successful for centuries.

Pliny the Elder was a keen observer of natural phenomena and prolific author about them, as well as the civilian bureaucrat in charge of the navy. He was intrigued by the towering ash cloud rising up from the volcano. He decided to summon his swift Liburnian bireme, and go to look for himself. However, most of the people in Misenum were getting on with their daily lives. For them, volcanic activity at Vesuvius was a regular event, and not particularly notable.

So, what would be our moment in time for the Misenum diorama? Just prior to the major eruption, I decided. This is our moment. We know, but they don’t, how catastrophic this event will be for Pompeii and Herculaneum.The diorama is set in a busy marketplace which incorporates a lot of observable incidents about Roman life in Pliny’s time.

August 24th, in the afternoon – a moment in time as Pliny the Elder consults his maps (right). His widowed sister Plinia has drawn his attention to the curious volcanic cloud that has formed over Vesuvius. Admiral and bureaucrat by profession and keen amateur naturalist by inclination, he is intrigued and has ordered up his speedy bireme to take him to see the volcano first-hand.

As yet, he has not received the urgent pleas for help from doomed Pompeii. Behind him, Pliny the Younger, adopted nephew whose letters will subsequently tell us about these momentous days, flirts with his mother’s maid and decides not to accompany his uncle.

Meanwhile, down in the square, life in Misenum goes on with little attention being paid to smoking Vesuvius further down the Campania coastline. An angry Trimulcio, ex-slave, now prosperous entrepreneur not noted for his modesty nor honesty, abetted by his small but fierce wife Fortunata, berates his hapless slave for being careless with a cart full of Trimulcio’s suspect ‘vintage’ wine (left).

A merchant ship has just unloaded passengers and cargo from North Africa. The Nubian princess (at the foot of the gangplank, below) expected this mighty Roman city to be more spectacular and less squalid. She is accompanied by a crafty Egyptian lawyer who is translating and assisting.