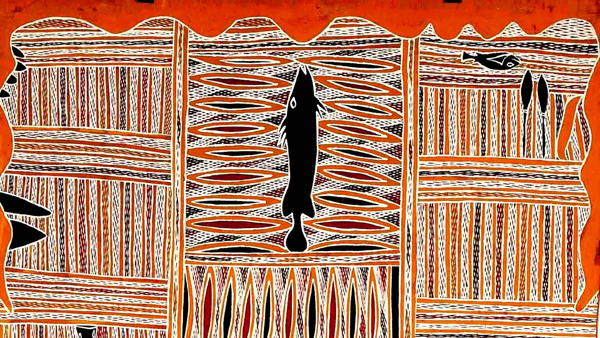 Luke Slattery, Tales from the sea, The Australian, 18 November 2017

History, culture and politics come together in a powerful collection of bark paintings.

Blue Mud Bay is, as its name suggests, a tidal wonderland teeming with bird and marine life. At this 90km stretch of coastline, on the western fringe of the Gulf of Carpentaria, land and sea meet, mingle and merge into floodplains, mangroves and mud flats. The area is ringed in the east, by plateaus and rugged hills of sandstone and quartz, in the west by a skew of islands and islets.

Blue Mud Bay also gives its name to a 2008 High Court case that recognised the local Yolngu people’s rights over the tidal waters overlaying their ancestral land. And for most of next year, in a powerful, newly-opened exhibition of Aboriginal art and artefacts titled Gapu-Monuk Saltwater, the Australian National Maritime Museum will celebrate the paintings produced by the Yolngu people, together with the politics of that art — and its impact on the High Court’s landmark ruling.

Kevin Sumption, the museum’s director and chief executive, explains that the exhibition is designed as a journey to “sea country” to discover how the Yolngu won their case with the aid of bark paintings, 40 of which will be on show.

“These were deemed the equivalent of title deeds to the sea rights of coastal waters in the Blue Mud Bay High Court decision,” he says.

The High Court decision extended sea rights beyond the Yolngu to the traditional owners of almost the entire Northern Territory coastline. Aboriginal freehold title is now recognised down to the low water mark. And when the exhibition opens, late next year, it will take viewers into the physical and mythical world of sea country, and the living reality of reconciliation.

Sumption, who this year was awarded a public Service Medal in the Queen’s Birthday Honours List, says the exhibition will “combine oral histories, aerial photography and traditional and contemporary indigenous objects including Mokuy, or spirit, carvings and Larratkitj. The latter are mortuary pole paintings on hollowed trees. The aim is to delve into the stories of the communities who created the paintings.”

Sumption sees the so-called Saltwater Collection as a “comprehensive map” of the Yolngu people’s law. “The paintings document the spiritual and traditional Yolngu ownership of land and sea estates in northeast Arnhem Land,” he says.

One of the bark paintings, by renowned Aboriginal artist Djambawa Marawili, titled Contemporary Madarrpa, recalls the days when men would fish using lines of bush fibres and hardwood hooks. In one motif of the painting, whose alternative title is Stingray at Lulumu, two men sail in a dugout canoe of a type adapted from Indonesian fishing boats. They have caught a man-sized dugong, which lies at the fore of the craft. In another image three men fish from an anchored canoe using wooden model fish, while at the top of the painting looms a stingray.

It was Marawili, today a member of the Prime Minister’s Indigenous Advisory Council, who started the paint-for-rights push in 1997 when he discovered illegal fishing on his clan’s sacred site. The purpose of the work, as he conceived it, was to explain the attachment of the traditional people to the land and its waters through narrative art.

“It is time for non-Aboriginal people to learn about this land, learn about the waters,” he said at the time. “So if we are living the way of reconciliation, you must learn about Native Title and Sea Right.”

In another painting titled Milniyawuy, by artist Naminapu Maymuru, a central strip depicts the Milky Way, and the souls of the deceased are so many stars. The heavens are also the resting place of the ancestral freshwater crocodile called Yinalpiya, and the first ancestors whose canoe capsized in the wake of a turtle.

The forthcoming exhibition catalogue describes a work titled From Biranybirany, by the late Miniyawany Yunupingu from the Gumatj clan, as the artist’s view when looking out to sea from his camp.

Helen Anu, the Saltwater exhibition curator, explains that the artist paints “his sea country” as seen from Biranybirany in Caledon Bay. “Bäru the crocodile is a powerful totem for the Gumatj clan. Behind the artist’s camp, Bäru builds his nest in the river where fresh and salt water meet, a place of fertility where barramundi go to breed, too.

“Other totems such as Malarra (mantra ray) and Guwarrtji (hawksbill turtle) live in the bay, and Djununggayangu the dugong feed on flames (sea grass). Fresh water from inland Biranybirany flows underground and wells up from the springs out in the bay. The dangerous stingrays are nuzzling these underwater wells.

“These are areas of great significance to the Gumatj as these wells have a pro-creative force. Gumatj clan people say: ‘I am from that water there — I am that water.’”