You are here: Home » Articles filed under: 'News' » Article: 'ANMM in conjunction with SunMan & ARENA'

ANMM in conjunction with SunMan & ARENA 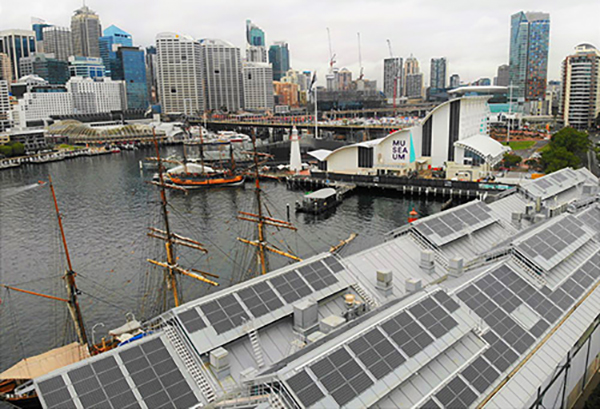 Wednesday August 14, The Australian National Maritime Museum announced today, in-conjunction with solar panel manufacture SunMan and the Australian Renewable Energy Agency (ARENA), that it has installed Australia’s largest lightweight solar panel roof on its Wharf 7, Heritage Centre in Darling Harbour. Museum Director and CEO, Mr Kevin Sumption PSM said the unique solar panel system was part of the museum’s commitment to a more sustainable and environmentally approach to its day-to-day operations. The 235kW solar panel system has enabled the museum to offset up to 25% of Wharf 7’s electricity consumption.

Kevin Sumption said the museum had been exploring the possibility of installing solar panels to Wharf 7 for a number of years. However conventional heavy glass solar panels could not cope with the roof’s 30 degree pitch and weight bearing issues.

“We came across a unique glass-free solar panel from SunMan. The 5.5 kg lightweight panels could overcome the building’s structural challenges and also have the same power output as 20kg conventional panels.” he said.

The ground-breaking solar panel used by the museum is called the ‘eArche’ and was developed by renowned Australian solar scientist Dr Zhengrong Shi of SunMan Energy Co Ltd. The panels were also responsible for creating the world’s first solar-powered train in Byron Bay.

“When I developed eArche I knew it could unlock the potential for solar on buildings which were previously unable to support conventional glass solar panels,” said Dr Shi.

“eArche innovations such as its light weight, flexibility, high performance and competitive costs, means that solar can now be applied to any building design.”

The museum’s solar panel installation was made possible by a grant from the Federal Government’s Public Service Modernisation Fund. The funding enabled the museum to undertake a number of additional sustainability initiatives for heating ventilation and air conditioning such as the transition from seawater heat exchange to air-cooled heat rejection system.

The Southern Cross Renewable Energy Fund (Fund) has made a $6.6 million investment into SunMan Energy Co Ltd to develop eArche. The Fund’s co-investors ARENA and Softbank China Venture Capital have each contributed $3.3 million to the Fund’s investment. The Fund is managed by Southern Cross Venture Partners.