You are here: Home » Articles filed under: 'News' » Article: 'ANMM in Indonesia' 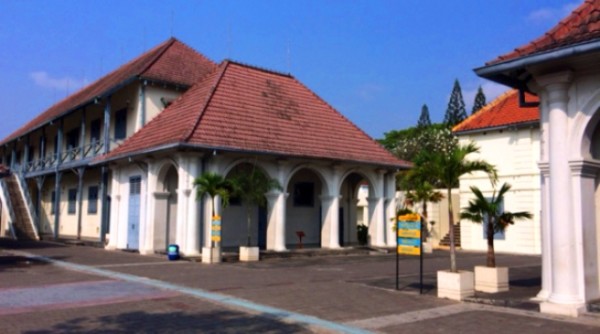 The Black Armada (Armada Hitam) exhibition about Australian support for the early years of Indonesian independence just after WWII opened at the Australian National Maritime Museum on 20 August 2015. You can see the display in the Tasman Light gallery over the next few months. Black Armada is a collaboration with the Museum Benteng Vredeburg in Yogyakarta, Indonesia. A travelling version of the exhibition opened there on 31 August.

Yogyakarta (Yogya for short) is a large, bustling town in south central Java, probably most well-known for the amazing night life on the Malioboro ‘strip’. The long street down the centre of Yogya comes alive at night, when the thermometer drops a little and the street bands start up. It is jam-packed with humanity and hawkers. You can get a vast array of food (theLesehans are now my favourite stop — shoes off, sit down on mats and order away your favourite Gudeg) and almost any sort of souvenir or batik shirt.

Yogya is also famous for its architectural legacies of both the Sultan of Yogyakarta and the Dutch colonial administration. The fortified walls around the Sultan’s palace once housed acres of gardens, bath houses, redoubts and the residences of the Sultan’s retinue. A small city within a city, the complex — called a Kraton — draws swarms of both Indonesian and overseas visitors.

So too the remnants of colonial Dutch architecture — redolent now with the decay of over 300 years of Dutch rule bypassed by a modernising independent Indonesia after 1945 with other things on its mind than preserving colonial architecture — solemnly remain prominent features in the centre of what is a low-rise and ever sprawling city. The wealth exploited from Indonesia by the Dutch East Indies empire seeps out of the arcades and columns of the Central Post Office and the grand Governor’s residence.