November 28th, 2019 | Browse other: News. | Tagged with: How museums can hook children for a lifetime, Macquarie University, researchers attached GoPros to young children | 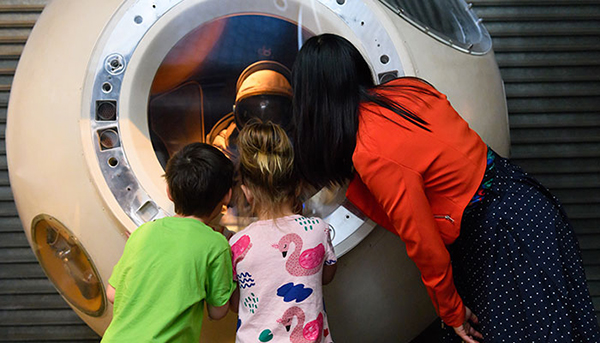 Learning together: the research found children respond to exhibits well when they can talk to their parents about what they are seeing.

Fran Molloy, How museums can hook children for a lifetime of learning, Macquarie University, 18 November 2019

Macquarie University researchers attached GoPros to young children and watched them play in different museums – what they found will help shape a new way of designing family-friendly exhibits at two of Sydney’s most popular venues.

New research from early childhood academics at Macquarie University is prompting museums to go further than the traditional approach of dedicating a separate space for their pre-schooler visitors.

Lifetime of learning: Captivating the curiosity of children is crucial to the long term sustainability of museums, researchers say. Videographer: Sophie Gidley.

As part of the quest to inspire the next generation of museum-goers, the study was conducted in partnership with the Powerhouse and Maritime Museums in Sydney’s Pyrmont. It found that even very young children will learn more and enjoy themselves more, if curators include something for them in all exhibitions.

“Museums want to create lifelong museum learners who will keep visiting museums and, eventually, bring their own children to museums too,” says Associate Professor Sheila Degotardi, who is the Deputy Head of Research in the Department of Educational Studies at Macquarie University.

“That’s why it’s important to get children coming in from when they are really young. Our research found that children and parents learn together when their curiosity is sparked by the same exhibits and they talk to each other about what they see.”

Annalice Creighton is the Programs Coordinator at the Australian National Maritime Museum and says that families with young children make up over half the audience.

“We want to design spaces that are engaging for both adults and children of all different ages, that inspire live conversations, interactions, wonder, and which are dynamic spaces for everyone,” she says.

Creighton says that the study brought a few surprises. “It was fascinating to see some unexpected physical features sparking learning conversations,” she says.

A traditional display of a model ship set off some wonderful storytelling around the intricate detail in the model, she says. “A soundscape in the Eora gallery was enough to trigger a conversation about a family holiday to Kakadu,” she adds.

Degotardi says that part of the Powerhouse Transport hall is another good example, where children and parents climbed up into a signal box overlooking life-size aeroplane exhibits.

“There was an exhibit of small toy planes and trains in the signal box. We found the children and their parents were making connections between the details of what they could see in the model exhibit and the life-sized exhibits. They would turn around and look out of the signal box at the plane hanging from the ceiling and compare these to the models. Being able to see things from different angles and perspectives helps young children to notice detail,” she says.

Degotardi’s research team observed eighteen different family groups with at least one child younger than school age, each visiting one of three museums and exploring two exhibits at the museums. Some were regular visitors, others had never taken their children to a museum before.

Children and parents all had GoPro cameras attached to their chests, with researchers also recording them from a distance. The family spent as long as they wanted in each space. Later, parents were interviewed about the experience. 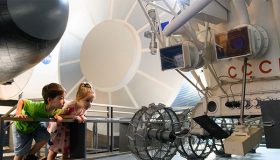 Play and learn: the Macquarie study set out to find out what it was like to be a young child in a museum.

Conversations between children and parents at the exhibits were analysed, and researchers took note of the things that engaged each group and how they responded to various parts of each exhibition.

Degotardi says the research was initiated by the Australian Maritime Museum’s former Head of Learning, Dr Lynda Kelly, who wanted to find ways that the museum could better engage young children. The Museum of Applied Arts and Sciences and Museums Victoria were important partners in the research, she says.

Making a space that a toddler will adore but a 12 year-old will also be intrigued by and that Dad and grandma like too – how they can all play together is where the magic is, and that’s the future of museums.

“The museums were all interested in finding out what it’s like to be a young child in a museum. People think you need to simplify things for very young children – but we found that was not the case,” she says.

“We found plenty of ways that museums can design spaces with all kinds of visitors in mind, including both parents and children and people of all ages, and that’s going to be the most effective way to engage all of them and to get people to stay and to come back again.”