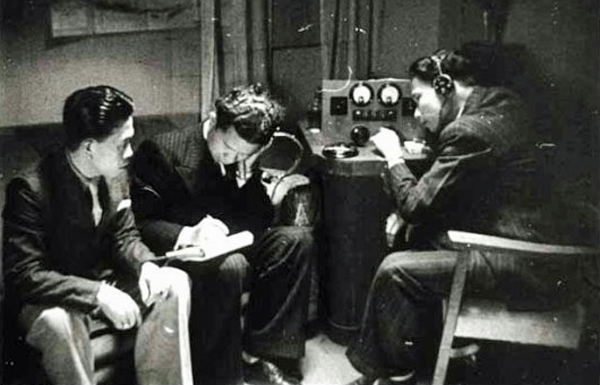 Indonesian sailors in Sydney in 1945 listening to the proclamation of Indonesian independence, recreated for the 1946 film Indonesia Calling by Joris Ivens. National Film and Sound Archive, Australia.

This weekend (25-26th February 2017) the President of Indonesia will visit Australia for the first time since being elected in 2014. President Joko Widodo will be talking with the Australian Prime Minister Malcolm Turnbull. Much of the discussion – typical of  Australia’s long relationship with its northern neighbour – will undoubtedly be about maritime related affairs. As Indonesia furthers its policy of focusing on maritime development as one of fundamental importance in an archaepeligo of around 18,000  islands, the historical maritime links between the two countries should not be forgotten.

In honour of the President’s visit to Sydney over the weekend, the museum will display an exhibition that explores one of the most significant – and largely forgotten – periods of strong bonds based on maritime links in the two nations histories. The display Black Armada – Australia’s support for Indonesian Independence 1945-1949 was developed for the 75th anniversary of independence in August 2015. The exhibition has been on display at the Museum Benteng Vredeburg in Jogjakarta, the ARMA museum in Bali, as well as here in Darling Harbour.

You can read more about this fascinating and important period of Australian links with Indonesia in the museum’s Feature Story.