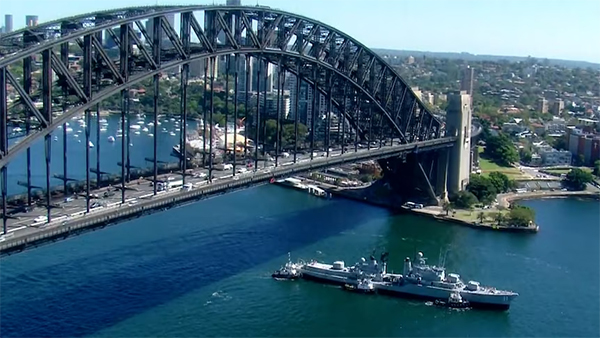 Onlookers caught the spectacle of the ship being moved by tugboats. (ABC News).

A decommissioned warship usually on display at the Australian National Maritime Museum has been moved through Sydney Harbour to Garden Island for conservation work.

The HMAS Vampire was moved by three tugboats from Darling Harbour as the ship has no functioning engine.

The vessel, which sits on the water while on display at the museum, will undergo $3 million in repairs, including work on its hull.

The museum’s chief executive, Daryl Karp, said the ship was due for major conservation work. 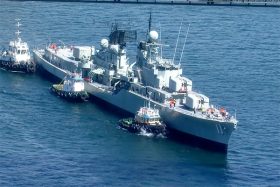 “Her keel was laid 70 years ago [and] we’ve had roughly five million visitors go on to her,” Ms Karp told ABC Radio Sydney.

“As with anything that sits on the water — saltwater and museum objects [are] not a good mix.”

Ms Karp said while the ship took a lot to maintain, it was important to have the display on the water. 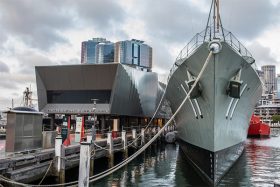 “We’re continually having to take it onto dry dock, to check it for rust, to repair things,” Ms Karp told Breakfast presenter James Valentine.

“And to make sure that she remains absolutely safe for all our visitors.”

The last of its kind

HMAS Vampire was built on Sydney’s Cockatoo Island in the 1950s, with its keel laid in 1952.

The ship was one of three Daring class destroyer ships built in Australia.

Ms Karp said the vessel was one of the last big gun ships to be built, as subsequent fighting ships were equipped with missile weaponry.

“She and her two sister ships were the first all-welded ships to be constructed in Australia,” Ms Karp said.

“There’s an enormous sense of pride and achievement in these ships being manufactured locally.”

Despite its intimidating size, Ms Karp said the warship had a relatively peaceful career.

The ship was used to escort soldiers to Vietnam in the 1960s.

It was then turned into a training ship in 1980, before being decommissioned in 1986 and given to the museum in 1997.

A special sight on the harbour

The manoeuvring ship turned the heads of people out walking around Sydney Harbour on Wednesday.

Jim from Coogee was walking his grandson in Barangaroo Reserve when they stopped to see the boat turning around just off Darling Harbour.

“With this harbour, it’s so magnificent — every day you come down here is special, no doubt about that,” he said.