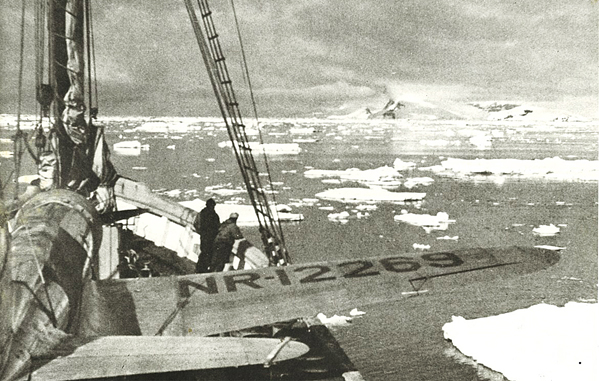 On 26 December 1947, a small, nondescript wooden-hulled motor vessel set off from Hobart, bound for Antarctica. Its silhouette resembled that of an ageing offshore fishing craft, but its weather deck was packed from stem to stern with supplies and equipment – including a single-engine Vought-Sikorsky Kingfisher floatplane. At the helm was Commander Karl E Oom, an officer in the Royal Australian Navy (RAN). He was supported by five naval officers, 22 ratings, a Royal Australian Air Force pilot and air fitter mechanic, and an Australian Department of Information photographer. The complement was rounded out by four civilian scientists who were responsible for conducting a series of experiments, and observing meteorological and other natural phenomena in the Antarctic. Their voyage would be the first to operate under the banner of the Australian National Antarctic Research Expedition (ANARE), a series of post-war initiatives to establish Australian scientific research stations in Antarctica and the sub-Antarctic territories of Heard Island and Macquarie Island. ANARE laid the foundation for the establishment of the Australian Antarctic Division, and in later years Australia’s polar research ships could trace their lineage back to the little timber craft then making its way towards the world’s southernmost continent: HMAS Wyatt Earp.

From fishing boat to ‘aircraft carrier’

Australia’s most improbably named naval (and polar research) vessel began life as Fanefjord, a specially designed herring fishing craft named for a 20-kilometre-long fjord east of the Norwegian shipbuilding town of Molde. Its single-decked timber hull was constructed of pine and oak and launched from the ways at Molde’s Bolsønes shipyard in 1919. It was 135 feet 7 inches (41.3 metres) in overall length, had a beam of 29 feet 2 inches (8.9 metres), a 14-foot 4-inch (4.4-metre) draught and a displacement of 402 tons. In 1933, Fanefjord was acquired by American explorer Lincoln Ellsworth for his inaugural 1933–34 Antarctic expedition. Ellsworth refitted and sheathed the vessel with oak and steel armour plate and renamed it Wyatt Earp after one of his childhood heroes, the legendary marshal of the towns of Dodge City and Tombstone in the American Old West.

Ellsworth was a wealthy adventurer who trained as an aviator during World War I and later funded and accompanied two polar air expeditions (in 1925 and 1926) led by Norwegian explorer Roald Amundsen. The second journey, which embarked aboard the airship Norge, sighted the geographic North Pole. In 1930, Ellsworth met Australian polar explorer Sir Hubert Wilkins. The two men became fast friends and began planning an expedition to Antarctica. Wilkins was assigned the task of finding a suitable vessel, and purchased Fanefjord during a visit to Norway in 1933. He then transferred the ship to Ellsworth and would go on to act as the American’s trusted technical advisor and expedition organiser.

Inspired by Amundsen’s expeditions, Ellsworth led four of his own to Antarctica between 1933 and 1939, aiming to explore the continent by air and conduct the first trans-Antarctic flight. Wyatt Earp’s main role was to serve as a base ship for Ellsworth’s aircraft; the first of these, a Northrop monoplane named Polar Star, was successfully used during the 1933–34 expedition, but only after Wyatt Earp was safely navigated through heavy pack ice and survived being icebound for 13 days. Polar Star was again used during Ellsworth’s second and third expeditions, and it was during the latter (in late 1935) that he and his English pilot, Herbert Hollick-Kenyon, attempted to fly across the continent from the Antarctic Peninsula to Little America, one of Richard E Byrd’s abandoned bases on the Ross Ice Shelf. The trip was often beset by bad weather, and after two weeks Polar Star ran out of fuel before reaching the base. Ellsworth and Hollick-Kenyon completed the trip only after a harrowing 11-day journey on foot. Eventually they were retrieved by a search party in mid-January 1936. Other than Byrd’s 1929 Antarctic flight and the overland journeys of Scott and Amundsen to the South Pole, Ellsworth’s 1935 flight penetrated further into Antarctica’s interior than any other expedition before it and is considered the first successful transit of the continent by air.

Ellsworth’s fourth and final expedition in 1938–39 again used Wyatt Earp as a base ship – this time for a Northrop Delta monoplane and a small Aeronca two-seater aircraft to act as a scout. Both planes were outfitted with wheels, pontoons, skis and two-way radios. From the outset, the weather was abysmal, and it took 45 days just to work the vessel through some 800 miles (1,287 kilometres) of pack ice to reach the Antarctic coast. Despite the conditions, the Northrop monoplane undertook two flights, the second of which penetrated 210 miles (338 kilometres) inland and resulted in Ellsworth making territorial claims for the United States. Following the serious injury of a Wyatt Earp crewman, Ellsworth abandoned the expedition and the vessel survived heavy pack ice and seas to arrive safely in Tasmania in February 1939. Wyatt Earp was put up for sale and purchased by the Australian government shortly thereafter.