You are here: Home » Articles filed under: 'News' » Article: 'ANMM opens Ghost Nets of the Ocean' 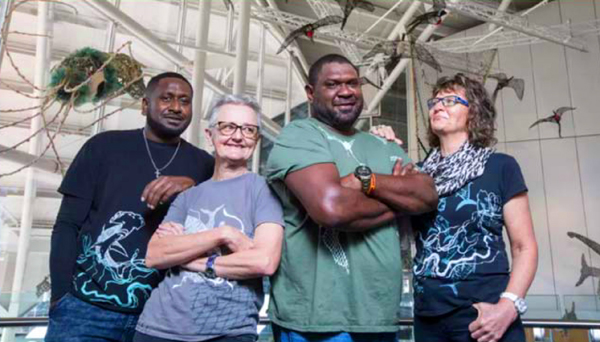 Peter Hannam, ‘Very surprised’: A substantial change is under way at the Maritime Museum, The Sydney Morning Herald, 8 September 2018

Jimmy K Thaiday, an artist from the Torres Strait Islands, calls out to an installer operating a hydraulic lift high above him in the foyer of the Australian National Maritime Museum, telling him to adjust the oars on the outrigger canoe that will greet visitors to the Darling Harbour site.

“Nobody paddles that flat,” he laughs. “Try 45 degrees-ish.”

Mr Thaiday is one of 14 artists from Erub Arts whose work features in the Ghost Nets of the Ocean – or Au Karem Ira Lamar Lu – an exhibition that opens on Saturday.

The works are not only intricate and beautiful but are made entirely from abandoned fishing nets and recycled plastics, highlighting the threat posed to wildlife and the health of the seas by these castaways. Nets are woven into turtles, fish and even a reef complete with bleaching corals.

Kevin Sumption, the museum director, hails the Ghost Nets works the institution has acquired for its permanent collection as part of “a substantial change” under way.

“We’re not just about the past,” he says. “We certainly want to be better custodians of the ocean than we have been.”

While the federally funded institution, opened in 1991, will maintain some of its original role to highlight the history of the Royal Australian Navy and immigration, the focus is shifting to address visitors’ growing interest and concern about the environment.

“Our audiences are … telling us about their passion and their interest in the health of our oceans,” Mr Sumption said.

Anyone who has not visited the museum in the last few years “will be very surprised at the kinds of stories they will encounter now,” he said, adding the next new exhibition – On Sharks & Humanity – will use some the world’s leading contemporary artists to showcase the need for shark protection.

Keith Grimley, president of the NSW section of the Naval Association of Australia, said that while conservation “had a big part to play”, it would be disappointing to see the role of James Cook, the First Fleet and naval traditions downplayed.

“I’d hate to see the emphasis on Australia’s foundation as a maritime nation being put to second place,” he said. “As a seafarer, we think of ‘maritime’ as ships going to sea.”

Mr Grimley said it was important funding continued to be made available to ensure maintenance and safety was continued for The Endeavour, the tall ship James Craig, the HMAS Vampire destroyer and other moored exhibits.

Mr Sumption, though, said his museum had set out “very consciously not to be traditional and to be challenging traditional notions”.

He pointed to the Gapu-Monuk Saltwater, an exhibition at the museum until February of bark paintings and other art by the Yolngu people of north-east Arnhem land.

The collection was not only of high artistic value but it also helped win the Blue Mud Bay legal case in the High Court, establishing Indigenous sea rights for almost the entire Northern Territory coastline.

“Wherever possible, we’re making use of the creative and artistic marketing skills of very many now specialist Indigenous-owned businesses,” Mr Sumption said.

The process provides “another level of authenticity and I believe power as being a story not only about community but told and produced by community,” he said.

Visitors to the Ghost Nets exhibition looking up at the outrigger canoe will, if they look closely, see the Tagai.

That’s the creation deity of the Torres Strait Islanders, which also represents the constellation of stars spanning the southern heavens, a map that helped people navigate for eons.

“The Tagai is such a big part of Torres Straits,” Mr Thaiday said, adding that so was conservation.

“Taking enough but only enough – that’s what we were taught to practise.”