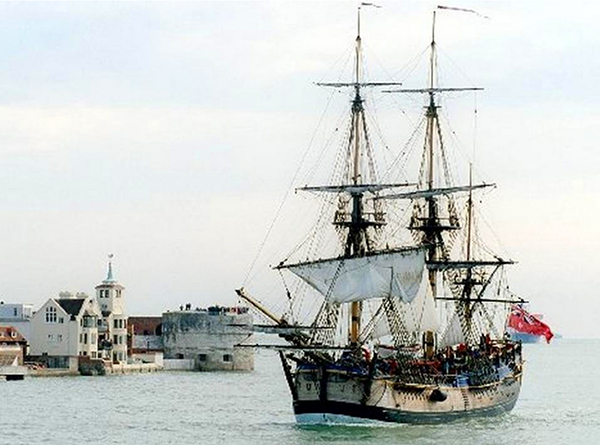 Marine archaeologists assemble in Newport as quest resumes to prove which wreck is the ship on which Capt. Cook discovered Australia. It also played a role in the American Revolution.

NEWPORT — Archaeological divers from Rhode Island and Australia are gathering in Newport to positively identify the wreck of Capt. James Cook’s Endeavour, the ship that took him around the world and from which he discovered Australia.

A news release from The Rhode Island Marine Archaeology Project, along with the Australian National Maritime Museum and Australia’s Silentworld Foundation, said that starting Thursday, the three entities are working together again to identify which of several wrecks in the harbor is the Endeavour.

RIMAP Executive Director Kathy Abbass, of Bristol, spent Thursday assembling equipment such as the induction dredge that the divers will use to expose more of the ship. They are hoping to uncover some of the Endeavour’s unique structural features.

After Cook’s historic journey, the ship was sold, renamed the Lord Sandwich and hired to transport British and Hessian troops to fight the Colonists in America. It was used as a prison ship in Newport harbor until the British scuttled it, along with 13 other British ships, just before the Battle of Rhode Island in 1778.

The joint archaeology project last summer identified the wreck that was most likely the Endeavour/Lord Sandwich. This summer, the team will take samples and test them in a new conservation lab built with Australia’s help and private donations at the Herreshoff Marine Museum in Bristol.

The wrecks are buried in mud and silt, but the maritime archaeologists will expose key parts of the ship’s structure; will preserve and analyze the artifacts they find and compare timber and ballast samples to what is known about the Endeavour’s history.

For example, the ship was built to carry coal, using white oak for the hull and interior decks. The Royal Navy bought it for a three-year exploration voyage, from 1768 to 1771, and renamed it the Endeavour. Upon its return to England after discovering Australia and nearly sinking on the Great Barrier Reef, the boat was sold and renamed the Lord Sandwich. Elm was used for the keel and stern post, and pine and fir for the masts, according to a 2003 book by Kieran Hosty and Paul Hundley, “Preliminary Report on the Australian National Maritime Museum’s participation in the Rhode Island Marine Archaeology Project’s search for HMB Endeavour.”

The project is not open to the public or the media, although onlookers may be able to see the dive boat from shore. Progress reports and limited access will be given on Aug. 27 and Sept. 3, the news release said. A summary of the results will be announced on Sept. 8, and an hour-long documentary about the 2019 research, sponsored by the Rhode Island Foundation, is expected to be released by year’s end.

Australia and New Zealand will celebrate their 250th anniversaries next year, Abbass said, and they’d love to display preserved artifacts from the ship proven to be the one that claimed them for Britain.