May 9th, 2019 | Browse other: News. | Tagged with: Australian National Maritime Museum, search for the Endeavour, shipwreck off Rhode Island may be Endeavour | 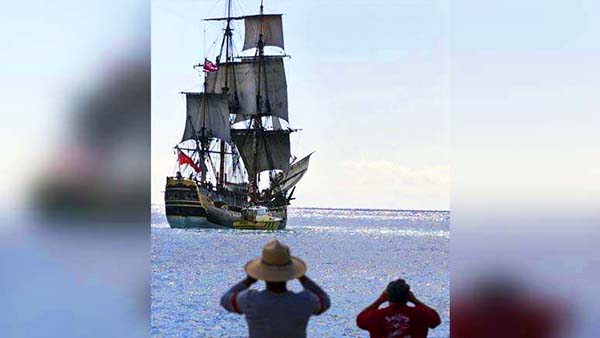 FILE – In this Nov. 15, 1999, file photo, people watch as a replica of the HMB Endeavour leaves Honolulu, as it embarked on a four-year, around-the-world cruise. The original vessel was commanded by Capt. James Cook in the 1700s when he became the first European to chart Australia’s East Coast. Researchers said in September 2018 they’ve found a site where they think the ship that Cook used sank and may be located, and are planning an excavation off the coast of Rhode Island. (AP Photo/Ronen Zilberman, File).

Researchers to discuss plans to look for Captain Cook’s ship, 7 News Boston, May 2019

PROVIDENCE, R.I. (AP) — Researchers are unveiling their plans to study a shipwreck off the coast of Rhode Island, hoping to determine if it’s the vessel that 18th-century explorer Capt. James Cook used to sail around the world.

The Rhode Island Marine Archaeology Project, which is leading the search effort, will announce its fieldwork for this year Sunday at the Herreshoff Marine Museum in Bristol.

The projects include the search for the Endeavour in the harbor near Newport.

Kevin Sumption, head of the Australian National Maritime Museum, plans to talk about his museum’s ongoing partnership with the Rhode Island organization to identify the Endeavour and explain why the vessel is so significant.

Nearly 250 years ago, Cook ran aground on Australia’s Great Barrier Reef. He used the Endeavour to claim Australia for the British.