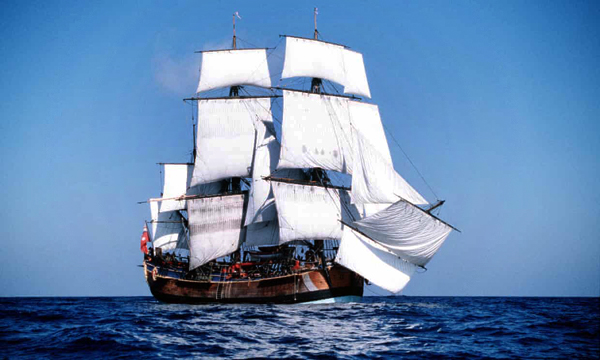 A full-scale replica of Captain Cook’s ship the Endeavour. Marine archaeologists believe they have found the wreckage of the ship near Newport, Rhode Island, US. Photograph: Chris Terrill/BBC.

Marine archaeologists believe they have found the wreckage of the famous ship off Newport, Rhode Island

The possible discovery of HMS Endeavour off the east coast of the US has been hailed as a “hugely significant moment” in Australian history, but researchers have warned they are yet to “definitively” confirm whether the wreck has been located.

On Wednesday Fairfax Media reported archaeologists from the Rhode Island Marine Archaeology Project, or Rimap, had pinpointed the final resting place of the famous vessel in which Captain James Cook reached Australia in 1770.

The ship was later used by the British royal navy in the American war of independence and was eventually scuttled with a dozen other vessels off Newport, Rhode Island in 1778.

Kathy Abbass, the director of the project, reportedly told Fairfax that “we can say we think we know which one it is”.

The director of the Australian National Maritime Museum, Kevin Sumption, confirmed to the Guardian that a “promising site” had been located, though he said it had yet to be confirmed as the final resting place of the Endeavour.

He said divers in the US were currently working to confirm whether one of five shipwrecks is the Endeavour by gathering samples from the location.

“It’s not definitive that this is Endeavour,” he said. “We’re carefully gathering very specific samples of timber and we’re going to conduct forensic analysis to see what we have. Most of the ships that were scuttled in Newport in August 1778 were built of American or Indian timbers [but] the Endeavour was built in the north of England of predominantly oak.

“With some good detective work we can sample the timbers of this promising site [and] then we might have evidence that this ship is at least British in origin.”

Cook departed Plymouth in August 1768, and in April 1770 the Endeavour became the first European ship to reach the east coast of Australia when Cook arrived at what is now known as Botany Bay.

The ship was renamed the Lord Sandwich 2 and in its later life was used by the British as a prison for Americans captured during the war of independence.

It was scuttled in 1778 along with 12 other ships to act as a blockade in the lead up to the battle of Rhode Island.

Sumption said divers believed the wreck may be the missing Endeavour because of the dimensions of the timber samples found at the bottom of the harbour.

“Basically what we know is the size of the Endeavour hull [and] a ship of that type uses certain dimensions of timber,” he said. “We’ve found samples that look like they may be consistent with a ship of that size.”

If the timber samples turned out to be British in origin, the researchers would seek approval from local authorities in the US to dig around the wreckage to seek further evidence.

The search for the Endeavour is a joint project between RIMAP and the Australian National Maritime Museum.

On its website Rimap published a statement saying they had “identified a possible site in Newport Harbour that might be the Lord Sandwich ex Endeavour” but that it required “detailed work … to prove it”.

The Rhode Island state government also claimed official ownership of the fleet of shipwrecks in 1999, and while Sumption said it would be “hugely significant” to find the Endeavour, it would be “very, very unlikely” the wreck would be in a condition to travel to Australia.

“What we can see on the seabed in Rhode Island is that all the 13 wrecks look somewhat similar, they really are a jumbled collection of timbers and stone ballast,” he said.

“It’s very unlikely that significant parts of the vessel are intact, so the chances are that all you really have are samples of timber and if we’re very lucky maybe materials which relate to its last use as a prison ship.”

The Australia National Museum is planning an exhibition to mark the 250th anniversary of Cook’s arrival in Australia in 2020.

Ian Coates, the director of the exhibition, said it was an “amazingly timely discovery”.

“We have a tendency to think the story stops when the Endeavour leaves Australian waters, but to think about what it did back in England in 1771 and on to the east coast of the US, it’s fascinating.”

He said he held out hope some part of the wreckage could make it to Australian shores again.

“In a museum you’re aware of the power of objects to take people back to the moment when these things are used or created,” he said. “To have something like the Endeavour as part of the story of the Cook voyage would be amazing.”