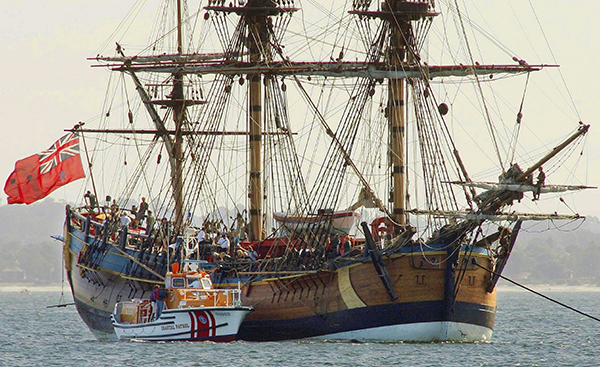 In this April 17, 2005 file photo, the Endeavour, a replica of Captain James Cook’s ship of discovery, lies at anchor in Botany Bay at Sydney, Australia. Researchers believe the wreckage of the ship Cook used to explore around the world is submerged somewhere in Rhode Island’s Newport Harbor. If it is the Endeavour, the ship would belong to the state of Rhode Island, because of the state’s legal maneuver in maritime court nearly two decades ago based on an obscure, centuries-old maritime practice. (AP Photo/Mark Baker, File)

The approval of a permit to explore the site of the shipwreck in Newport’s Outer Harbor may help to determine if it is Captain Cook’s Endeavour.

The Rhode Island Historical Preservation and Heritage Commission announced Friday that they have issued a permit to the Rhode Island Marine Archaeology Project “for an intensive archaeological investigation of a shipwreck site in Newport’s outer harbor that was identified by RIMAP in 2018 as a strong candidate to be Captain Cook’s Endeavour.”

The fieldwork will determine the dimensions of the ship’s remaining structure and will potentially lead to the recovery of 18th-century artifacts and wood samples, potentially providing proof of the site’s identification.

The permit approval comes after Kathy Abbass, RIMAP executive director and principal investigator, and Kevin Sumption, CEO and executive director of the Australian National Maritime Museum, announced on April 28 the creation of an artifact management facility on the campus of the Herreshoff Marine Museum in Bristol. At the same time RIMAP and the ANMM confirmed the continued partnership between these organizations to conduct the 2019 field research in Newport’s outer harbor.

The fieldwork and conservation facility are funded primarily by the Australian National Maritime Museum along with local Rhode Island supporters. ANNM marine archaeologists will join the RIMAP team for three weeks of work on the selected shipwreck site in late August and early September.

“RIMAP has been homing in on Endeavour for years, and has identified a particular shipwreck of the transport fleet as a strong candidate to be that iconic vessel. Thanks to support from the Australian National Maritime Museum, RIMAP’s new conservation facility will make possible the excavation that might provide the evidence needed to definitively identify the site in time for the 250th anniversary of Captain Cook’s historic voyage to Australia,” RIHPHC archaeologist Charlotte Taylor said in a statement.

“This fleet of ships is significant to local and national history because of its participation in events leading up to the Battle of Rhode Island in the American Revolution. So this ship, whichever one she might be, is important to United States history. But if we can find evidence that she is the Endeavour, then it would make a spectacular connection between Rhode Island and the international audience watching our progress,” Abbass added in the statement.

“The Australian National Maritime Museum’s marine archaeologists eagerly await joining the RIMAP team to take part in this intensive investigation at the end of August. James Cook’s Endeavour bark is of profound historical significance to Australian and New Zealanders and its search has also captured global attention. It is an exciting prospect that this search will being us one step closer to identifying whether the shipwreck could be Cook’s iconic ship,” Sumption said in a statement.

Positions Vacant » View All
» Training Officer – Sydney Living Museums
» Head of Digital Engagement & Insight – ANMM
Latest News » View All
One Year On – Stories of COVID-19 in Melbourne
MV partners with Office for Suburban Development Read more.
Museum of Toys & Collectibles, Christchurch
- 40 yrs collecting by Alan Preston Read more.
Atlas of Living Australia: Past, present &
future + Advisory Board Communique Read more.
Clever Country in a Changed World:
Re-Thinking Australian Science Policy Read more.
Carbon capture | Our Future Planet Science
Museum Group’s new climate exhibition Read more.
Top +
Council of Australasian Museum Directors, c/o Ms Daryl Karp, Museum of Australian Democracy at Old Parliament House PO Box 3934 Manuka, Australian Capital Territory 2603 Australia, © CAMD 2021
Copyright: All information and resources provided on this website remain the copyright of the Council of Australasian Museum Directors. Permission is granted for viewing and downloading for personal and not for profit purposes. Those wishing to reproduce any materials for commercial, educational or other uses are requested to contact us.
Disclaimer: The content of this website is provided for information purposes only and is not intended as a substitute for professional advice. No claim is made as to the accuracy or authenticity of the content of the website. The Council of Australasian Museum Directors does not accept any liability to any person for the information or advice (or the use of such information or advice) which is provided on this website. The information on our website is provided on the basis that all persons accessing the site undertake responsibility for assessing the relevance and accuracy of its content. No responsibility is taken for any information or services which may appear on any linked web sites. Hostgator.
.