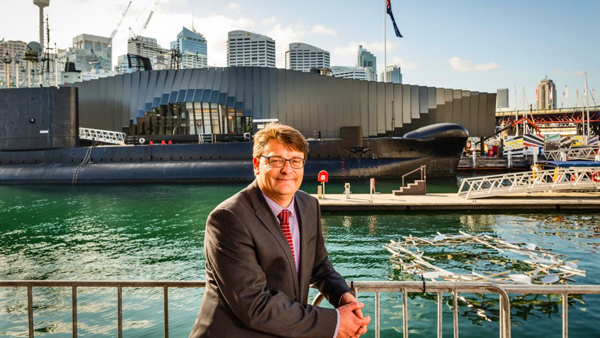 The well-travelled Kevin Sumption recommends learning about the history of a destination beforehand. “You cannot truly appreciate a place if you have no concept of its past.” Robert Walsh.

The terminal at Almaty International Airport had been blown up, the arrivals hall was a long trek through the snow, and Kevin Sumption had left Australia in his shorts. The Australian National Maritime Museum‘s director answers our Traveller Q&A.

As a public servant, I am conscious of budget, so I travel economy in Australia. Overseas, I usually fly business class, as this allows me to work while I am in transit.

I often travel to the United States, due to our shared maritime history. We have several important projects under way there, including our work with the Rhode Island Marine Archaeology Project to search for the wreck of James Cook’s Endeavour.

The airport on Norfolk Island, where I visit because of my position on the Kingston and Arthur’s Vale Historic Area Advisory Committee. When you arrive, it is reminiscent of a bygone era in air travel.

If I ran my own airline I would…

Almaty, Kazakhstan, where UNESCO sent me to run a workshop. It was February 2000, when the region was in a state of flux. Almaty International Airport was in darkness. The terminal had been blown up and the only way to get through to Arrivals was to trudge through the snow. I had left Australia in summer, so I was still in my shorts. And then the taxi driver and I spent several hours driving around Almaty trying to find the hotel.

My recent visit to New York. I had the privilege of attending a special dinner on board USS Intrepid to commemorate the 75th anniversary of the Battle of the Coral Sea. It was particularly special because the event featured the world premiere of a new documentary produced by the Australian National Maritime Museum about the battle. It was an honour to showcase our documentary in front of 700 guests, including Prime Minister Malcolm Turnbull and President Donald Trump, as well as several veterans.

The wonderful selection of indigenous food at the Mitsitam Café at the Smithsonian National Museum of the American Indian.

I never travel without my International Council of Museums Card, which gives me access to a fantastic selection of museums around the world.

First thing you do in a new city?

Download any apps available with information on public transport.

How do you make the most of a spare afternoon in a strange city?

It’s rare for me to have spare time, but if I do, I love to explore any new or cutting-edge exhibitions.

I don’t really experience jet lag because I usually don’t stay anywhere longer than two days, making it easier to adapt on my return.

Any other travel tips?

Always make an effort to learn about the history of a destination. You cannot truly appreciate a place today, if you have no concept of its past.

What technology do you use?

I like to take a record of any inspiring design or images. I used to travel with a high-tech SLR camera but now I find the iPhone 7 is just as good.

My favourite catalogue purchase was not bought overseas but has had a profound effect on me – a stunning coffee-table book from the Queensland Museum, which showcases the art, culture and history of Torres Strait Island people. It has been the inspiration for me to take the Maritime Museum in its current direction of focusing more on Indigenous programs and initiatives.

In 2015, I travelled to Turkey for the 100th anniversary of the ANZAC landing in Gallipoli. It was my great privilege to visit the wreck site of Australia’s second submarine, HMAS AE2. I joined members of the Australian and Turkish Navy for a memorial service, which was a particularly poignant moment as it marked the occasion when the museum became joint custodian of the vessel, responsible for its ongoing conservation.

Overseas travel always highlights to me how well Australian institutions communicate our history in innovative and engaging ways.

Lack of Wi-Fi on flights.