You are here: Home » Articles filed under: 'News' » Article: 'Ann Moyal: An independent life of history' 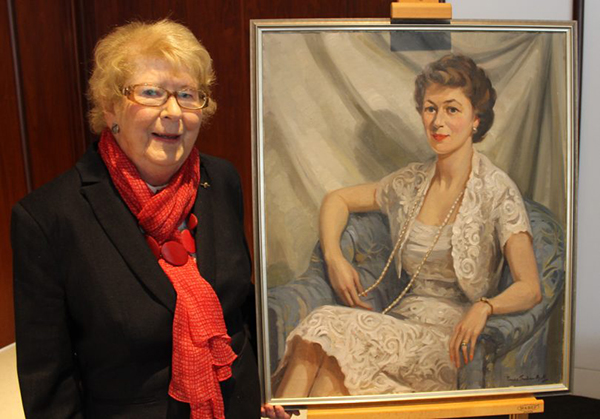 Dr Ann Moyal at the launch of A Woman of Influence: Science, men and history at the National Library of Australia in 2014, with her portrait painted by Pamela Thalben-Ball in 1957. Photo: Alex Rea.

Celebrated historian and prolific figure at the Australian National University, Dr Ann Moyal AM FRSN FAHA, has died at the age of 93.

Ann Moyal was born Ann Hurley in Northbridge, NSW in 1926, and on moving to Canberra in her youth attended Canberra High.

Moyal then attended the University of Sydney, residing in the Women’s College and graduated with a first-class honours degree in History in 1946, before winning a scholarship to the Institute of Historical Research at the University of London in 1949.

From 1954 to 1958 Moyal worked as a research assistant to the Canadian-British press baron and influential politician Lord Beaverbrook. Much of this time is recounted in her autobiography Breakfast with Beaverbrook. 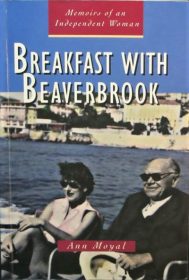 On her return to Australia in 1958, Moyal declined an offer of a PhD scholarship to the Australian National University. Instead, she took the position of inaugural assistant editor in the Research School of Social Sciences at the ANU, assisting Sir Keith Hancock to found the Australian Dictionary of Biography.

In 1962 Moyal moved on to become a research associate at the Australian Academy of Science and the ANU Research School of Social Sciences, where she worked on the memoirs of former prime minister Earle Page. Truant Surgeon: The Inside Story of Forty Years of Australian Political Life (1963), which Moyal edited was published after his death.

From this point, Moyal began to carve an independent career as the first professional historian of Australian science and technology. Examining many archives for the first time, she published A Guide to the Manuscript Records of Australian Science (1966).

Following her time as science editor with the University of Chicago Press, she published an influential critical paper on the Atomic Energy Commission (1975) and helped establish the science policy journal Prometheus (1983).

Her two major works are her monumental official history of Telecom, Clear Across Australia: A History of Telecommunications (1984), and A Bright and Savage Land: Scientists in Colonial Australia (1986), both considered pioneering volumes in the field.

These were followed by Women and the Telephone in Australia (1989), The Web of Science: The Scientific Correspondence of the Rev WB Clarke, Australia’s Pioneer Geologist (2003), Platypus (2001, 2010), Koala: A Historical Biography (2006) and Maverick Mathematician: The Life and Science of JE Moyal (2006).

Platypus: The Extraordinary Story of How a Curious Creature Baffled the World (2001) received an award for readable science from the Smithsonian.

Her first autobiography, Breakfast with Beaverbrook: Memoirs of an Independent Woman, was published in 1995 to much acclaim, followed by A Woman of Influence: Science, men and history in 2014.

Throughout her career, Ann held teaching positions at the NSW Institute of Technology (now the University of Technology Sydney) and at Griffith University, where she was Director of the Science Policy Research Centre.

She was awarded a Doctor of Letters in 2003 from the ANU and from the University of Sydney in 2007.

She was Patron of the Australian Science History Club and founder of its predecessor, the Colonial Science Club. She was also the Founder and first President of the Independent Scholars Association of Australia from 1995-2000.

Ann was elected as an Honorary Fellow in 1997 and in 1993 was awarded the Centenary Medal of Australia for her contribution to society and the humanities in the study of Australian science.

Moyal married three times: First to Michael Cousins in 1951, then Everest Mozley in 1957, and to mathematician Jose Enrique Moyal in 1962.

Moyal died on 21 July 2019 after a short stay in hospital. She will be greatly missed by her friends, family and colleagues.

Acknowledging the Australian Academy of the Humanities Vale by Liz Bradtke.