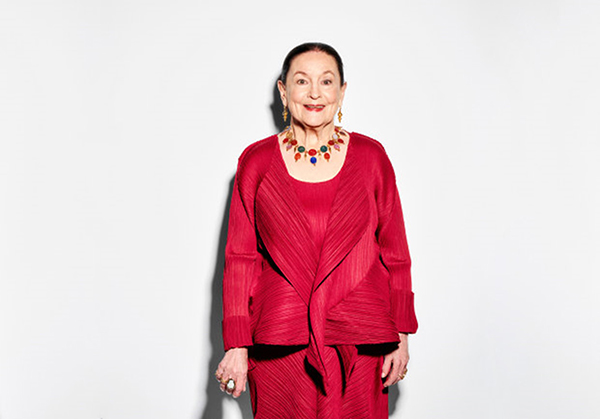 It could have been the jewellery sale of the year, a private collection that would have been the envy of auctioneers. We’re talking about the remarkable personal collection of renowned Sydney antique jewellery dealer Anne Schofield. But Schofield, who at 82 years of age still runs her celebrated shop in Woollahra, is not selling. Instead, she is donating 108 pieces of her rare and historic gemstone jewellery, worth close to $2 million, to Sydney’s Powerhouse museum in a gift that will transform the museum’s collections.

“It’s one of the most significant collection gifts in the Powerhouse’s history,” says the museum’s curator of decorative arts and design, Eva Czernis-Ryl.

The simple pleasure of giving is behind Schofield’s exceptional donation. Schofield has had a long association with the Powerhouse and in 2014 lent 70 significant pieces of jewellery to the museums’ award-winning exhibition A Fine Possession: Jewellery and Identity, a show so popular that it had to be extended into 2016. She has previously donated individual pieces to the Powerhouse, but this is her greatest gift yet, made with the recognition that Australia’s public museums are in want of the riches seen overseas.

“Having visited the great jewellery collections in the world, in London at the Victoria & Albert Museum and the British Museum, in Paris at the Musée des Arts Décoratifs, in New York at the Metropolitan, I’ve seen these marvellous collections of jewellery and I’ve been very aware that they have been made by donations from private individuals,” Schofield tells Saleroom.

“Since the exhibition in 2014, it’s been my intention to perhaps leave my private collection as a bequest, and then I thought, no, I’m not going to wait until I die I’m going to donate it now and enjoy the pleasure of sharing it.”

The collection ranges from the 17th century to the early 20th century, featuring gemstones and techniques reflecting the fashions and art movements of the time. Highlights include a spectacular necklace made from 18th century Italian intaglios (carved gemstones), Venetian carnival rings, gold mourning rings, Art Nouveau dragonfly and wasp pendants, an Egyptian Revival lapis lazuli necklace and matching earrings made in Rome in 1870, a French onyx cameo necklace with matching earrings from 1820, as well as Cartier and Georg Jensen pieces.

“The beautiful intaglio necklace which I absolutely love,” she says. “That was the hardest one to let go of.” 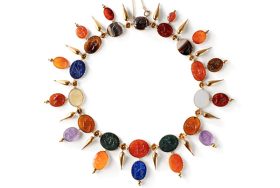 This necklace was made in England in 1870 from gold, agate, amethyst, bloodstone, carnelian, garnet, lapis lazuli and onyx intaglios that were made in Italy in the 18th century. England, c. 1870

That stunning necklace features 27 intaglios carved from a treasure chest of gemstones: lapis lazuli, bloodstone, chalcedony, cornelian, amethyst, branded agate, dark brown agate, and mid-brown agate. While the intaglios are from the 18th century, the necklace was made around 1870. Each of the stones is carved with a scene from Greek mythology, most of them involving Eros, the winged and naked god of love, who shoots arrows through the hearts of unsuspecting mortals. Eros is depicted in various adventures, whether riding a whale, or a seahorse, or pulling his bow and arrow, and sometimes with Aphrodite, the goddess of love.

“Each intaglio tells a story and that’s what is so fascinating,” Schofield says.

She notes that the interest in intaglios grew internationally after a Christie’s sale in 2019 of ancient Greek and Roman engraved gemstones that had been collected in the early 19th and 20th centuries by esteemed Italian art dealer Giorgio Sangiorgi.

That’s the kind of money Australian museums can only dream of spending on their jewellery collections – and the kind of money that the Getty’s Sydney-born director Timothy Potts, a former director of the National Gallery of Victoria, can access. It shows too the enormous competition globally for such jewellery. All of which underscores the importance of Schofield’s donation to the Powerhouse.

This demi-parure, consisting of necklace and earrings in Egyptian revival style, was made of gold and lapis lazuli by Luigi Freschi in Rome in the 19th century.

As the Powerhouse’s chief executive Lisa Havilah puts it: “Across her incredible career, Anne Schofield has continually sought out ways to share her remarkable collections with the public. This generosity of spirit could not be clearer than in this extraordinary donation that will transform the Powerhouse collection. Jewellery is not only powerful decorative art, but a form of social history and it is our privilege to share this with the community.”

Schofield’s passion for jewellery was ignited during her time in London in the early 1960s, which she describes as a “great period of learning”. She moved to London in 1962 to marry her now ex-husband, arts figure Leo Schofield, who was then working in advertising.

“I used to go into Bond Street, became friendly with all the dealers specialising in antique jewellery, and there were marvellous shops there then, some still exist, some don’t, but marvellous shops like Wartski, S. J. Phillips, Harvey and Gore, Hancocks jewellers and another near the British Museum called Cameo Corner.”

Schofield was also a frequent visitor to the V & A’s jewellery court, where she would deliberately jump up and down in front of the cabinets of diamond brooches mounted en tremblant – that is, mounted in such a way that the stones tremble to catch the light.

“It’s such a clever technique, they’re on these tiny little springs … and would have moved beautifully under candlelight and when worn of course,” says Schofield.

A spectacular 18th century brooch en tremblant is among Schofield’s previous donations to the Powerhouse.

Upon her return to Australia, Schofield was determined to open a shop specialising in jewellery. In 1970, she established Anne Schofield Antiques, in Queen Street, Woollahra, the heart of the auction trade. Bonhams fine jewellery specialist Fiona Frith, who works nearby, describes Schofield as “the Australian Queen of antique jewels”.

“She is exceptionally knowledgeable, a very astute collector and businesswoman … well regarded both here in Australia and in the United Kingdom,” Frith says. “A collection such as hers takes a lifetime of research and dedication.”

After more than fifty years in the business, Schofield notes that antique jewellery remains a niche market here. 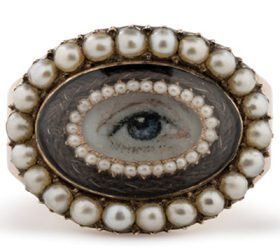 This ring of gold, ivory, pearls and hair was made in England c. 1800.

“I think the interest in Australia in antique jewellery is not very great,” she says. “People are interested in high-quality gemstones and modern jewellery. That’s what they prefer, it seems to me, and in fact you rarely see fine items of antique jewellery coming up at local auctions in Australia, so it’s a sort of area that has been rather neglected, and I often think it’s because there’s nowhere where people can go and look at these things. The museums to date have not been great at exhibiting these items and collecting these items.”

She is hoping that her donation to the Powerhouse will change all that.

“That’s why I have been donating lovely things over the past 30 years, trying to enhance the collections of the Powerhouse. I think it’s important to give back to the country if you’ve had a bit of success in life. It’s just lovely to share it, so I’m quite excited about it really and I think it’s the right thing to do at this stage. The collection will be stored and conserved professionally, it will be exhibited in the future, and it will give great delight to many, many, people, I’m quite sure of that.” 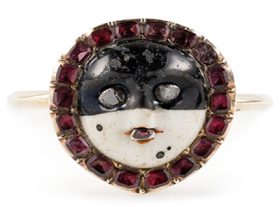 This ring of gold, enamel, garnets and rose diamonds was made in Italy c. 1760.

Schofield’s donation will go on display at the Powerhouse Ultimo next year, becoming part of the museum’s 1800-strong jewellery collection. Czernis-Ryl says that the “exquisitely crafted” objects in Schofield’s collection, “made from a dazzling range of materials … will enable us to tell a richer story of jewellery as one of the earliest and most powerful tools to communicate our cultural and individual beliefs, identity and creativity in societies across time and place.” 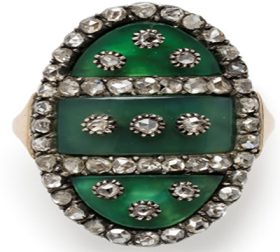 Powerhouse Trust President Peter Collins says “this transformative gift to the people of Sydney and New South Wales will have an impact for many generations to come”.

With all these splendid pieces donated to the Powerhouse, one wonders if any remain for Schofield to wear; after all, she is known for her show-stopping style.

“I have a couple left,” Schofield says with a laugh. “I have a little amethyst necklace which I love and some pretty amethyst earrings. I’m fine. You realise you can’t have everything. And of course, I have a big cameo ring and a smaller intaglio ring which I wear every single day of my life.”

Gabriella Coslovich is an arts journalist with more than 20 years’ experience, including 15 at The Age, where she was a senior arts writer. Her book, Whiteley on Trial, on Australia’s most audacious of alleged art fraud, won a Walkley in 2018.