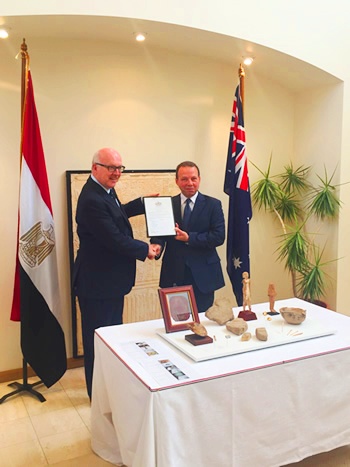 Arts Minister Senator George Brandis and His Excellency Ambassador Dr Hassan El-Laithy of the Embassy of the Arab Republic of Egypt.

The Australian Government has returned a number of culturally significant antiquities to Egyptian authorities in an official ceremony at the Embassy of the Arab Republic of Egypt.

The return of antiquities to Egypt is the result of a shared commitment by the governments of Egypt and Australia to protect and preserve cultural objects.

The antiquities date back to significant periods in Egyptian history and were exported from Egypt in breach of its national cultural laws.

This collection of antiquities includes many funerary objects such as a wooden hand belonging to an anthropoid coffin, small statuettes known as shabtis to serve the deceased in the afterlife, as well as a number of amulets to protect the deceased. A Coptic textile fragment and large saucer lamp were also among the relics returned to Egyptian authorities.

The items were seized under the Protection of Movable Cultural Heritage Act 1986 from an auction house and private residence in Australia by the Ministry for the Arts and Australian Federal Police at the request of Egyptian authorities.

More information about the Protection of Movable Cultural Heritage Act is available on the Ministry for the Arts website.