You are here: Home » Articles filed under: 'News' » Article: 'ANU says no to Ramsay'

ANU says no to Ramsay 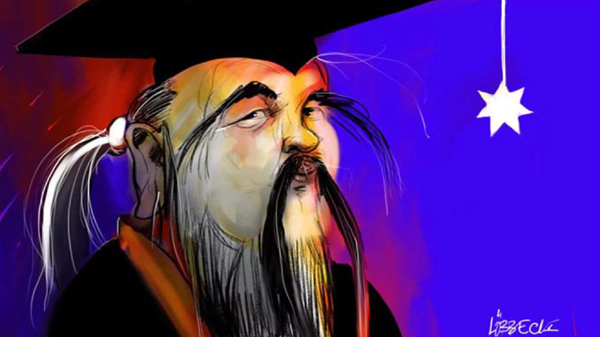 John Fitzgerald, ANU says no to Ramsay, but what about Confucius Institutes, The Australian, 6 June 2018

On June 1, Australian National University vice-chancellor Brian Schmidt announced the ANU was withdrawing from negotiations with a wealthy private donor, the Ramsay Centre for Western Civilisation, over funding for a scholarship and teaching program in studies of Western civilisation. The terms the donor attached to the deal were not compatible, he said, with the autonomy of the university.

It is a brave vice-chancellor who would turn away a generous donor offering to help sustain classics, religion and philosophy in the present funding environment for endangered humanities disciplines.

Then again, only a university with little self-respect would accept a gift that came tagged with concessions granting a donor a stake in the selection of staff or in the design of research and teaching programs. We have seen enough of that already.

Weighing the value of vibrant scholarship against the inclination of donors to have a say in how their donations are spent is a delicate balance. With Confucius Institutes, Australian universities clearly got the balance wrong.

In this case, a donor in China assigns a teacher to each program and sets clear limits on what can be said and done in the classroom.

In effect, a number of Australian universities that are keen to expand their Chinese language and studies offerings have undermined their academic integrity, autonomy and freedom by ceding control over staffing and content to a donor. 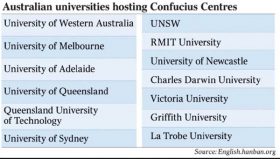 In striking a balance between scholarly integrity and donor intent, what is at issue is not the merit of a particular donor or the value of the scholarship supported by the donation, but the degree of direct involvement the donor is permitted to exercise over the staffing, teaching and research supported by a donation. This goes to the reputation and integrity of a university and to the principle of academic freedom.

Getting this balance right can help to inoculate universities against reputational damage. The president of highly ranked George Mason University in Virginia is currently fending off attacks on the university’s donor partnership with the Koch brothers.

The Kochs are notorious in liberal circles for their consistent support for conservative causes. George Mason University has no problem with that. Still the university is suffering reputational ­damage on the technical ground that it allowed donors to participate in the selection of staff in funded programs.

President Angel Cabrera recently conceded in a message to faculty that the conditions governing the Koch gifts “granted donors some participation in faculty selection and evaluation”.

The funding agreements have since been rewritten to reflect the general principle that donors should have no direct say in selection or evaluation of academic personnel.

It is easy to lose sight of this point in the political controversy surrounding the Ramsay Foundation’s negotiations with the ANU.

The staff union and student association are reported to be hostile to Ramsay’s self-proclaimed mission to promote “Western civilisation” in academic programs. The university can probably live with that.

What it cannot do is ignore the principles and procedures ­required to build a sustainable ­university-donor partnership that goes beyond the ephemeral ­politics of left-wing condemnation, right-wing commentary and heavy-handed political pressure from the government in ­office.

The ANU leadership is clear about the principles that should govern university-donor partnerships. Vice-chancellor Schmidt has spelled out the core principles guiding the university’s receipt of grants, which are designed to ensure that funded programs have academic merit “consistent with our status as one of the world’s great universities” while guaranteeing that all donor relations preserve the principles of academic integrity, autonomy and freedom. These principles apply equally to every donor partnership.

A number of universities that share these principles go further in publicly acknowledging the procedures they have in place to ensure that principles are followed.

The University of Melbourne’s procedures for accepting philanthropic gifts are publicly available online. They specify that the university must not give undue consideration to a donor in the use of a donation, and that the donor cannot direct the university to do so. The procedures also make clear that donors have no control over appointments to academic positions supported through their philanthropy.

The Ramsay Foundation itself acknowledges that these principles undergird the Western traditions it champions. Ramsay chief executive Simon Haines has been reported as saying that the Ramsay Centre for Western Civilisation is “completely committed to academic freedom, integrity and independence”, and that university autonomy is “a bastion of Western civilisation”.

Of course the Ramsay Foundation has an interest in seeing that its donations are well spent. Universities that value philanthropy are mindful of donor intent and legally obliged to meet it. But donors who insist on having significant input into the design of a research or teaching program, or into the selection of academic positions supported by their contributions, could undermine the capacity of Australian universities to manage all donors equally, including some that have little interest in preserving the liberal traditions of the Western academy.

In light of ANU’s principled withdrawal from the Ramsay negotiations, all universities that host Confucius Institutes need to reconsider, and if necessary renegotiate, the terms of their agreements.

At the same time, all politicians and media personalities who feel tempted to pressure universities to bow to donor demands need to be mindful of the general principles and wider issues at stake.

John Fitzgerald is professor emeritus in the Centre for Social Impact at Swinburne University of Technology.