You are here: Home » Articles filed under: 'News' » Article: 'Anzac should be contested'

Anzac should be contested 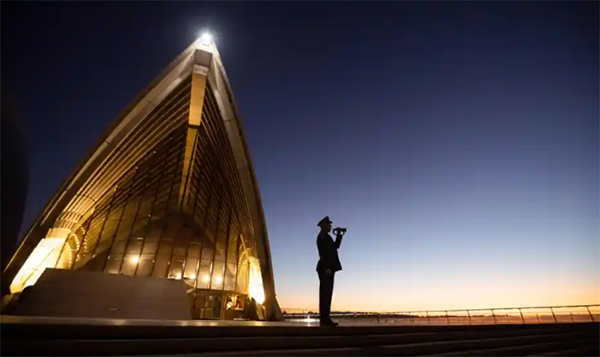 ‘Since 1916 many war veterans (not least the original Anzacs who protested against the politicisation of the war they fought) have refused to take part in commemorations.’ Photograph: Daniel Boud/Sydney Opera House/AFP via Getty Images.

Paul Daley, Alan Tudge is dead wrong. Anzac should be contested – as it always has been, The Guardian, 26 October 2021

He has been banging on with these dreary, condescending, cliched cultural themes, each instalment a little more ridiculous.

Ever since the warmonger Billy Hughes urged Australian men to go and “fight for White Australia in France” during the first world war, Australian politicians have been banging the drum on the supposed sanctity of Anzac Day.

All the while they’ve attempted to enshrine 25 April in cultural incontestability with the veneer of ecclesiastical language – “sacrifice” and “spirit” and “the fallen” (but never the eviscerated, drowned or incinerated “dead”) – they’ve attached to it.

More than a century’s hyperbole has been attached to Anzac and its memorial day since it was first observed in 1916. Still, special mention must be made of the federal education minister Alan Tudge’s Olympic stretches that a proposed new national curriculum would make Anzac Day a “contested idea” – and that a focus on negative aspects of Australia’s past could threaten national security.

He has been banging on with these dreary, condescending, cliched cultural themes for a while now, each instalment a little more ridiculous for its hysterics. And yes he was speaking to the socially conservative Centre for Independent Studies when he said: “We should expect our young people leaving school to have an understanding of our liberal democracy and how it is that we are one of the wealthiest, most free, most tolerant and most egalitarian countries in all of human history, which millions have immigrated to. If they don’t learn this, they won’t defend it as previous generations did.”

Predictable play to the audience, that one. He even called it all a bit “woke”, the classic right cultural warrior’s indictment of anything he/she finds distasteful.

Elsewhere he has criticised a proposed curriculum that would teach “the commemoration of world war one, including different historical interpretations and contested debates about the nature and significance of the Anzac legend and the war”.

“Anzac Day should not be a contested idea,” he contends. “It is the most sacred day in the Australian calendar.”

There’s that word – sacred. Is Anzac really sacred? Of course it is not, even though it has tended to be treated as such in Australian politics where, until recently when some have hit back at Tudge’s ham-fisted claims, in the words of the historian Peter Cochrane, “drape ‘Anzac’ over an argument and, like a magic cloak, the argument is sacrosanct”.

A couple of things.

First, Tudge is dead wrong: Anzac should be contested.

Then, good history involves the constant contestation and re-contestation of past events and how they have been culturally presented. Curriculums evolve with knowledge and debate, while teachers, historians, writers, film-makers and dramaturgs shift their gazes in line with new understandings and historical disclosures of – and willingness to confront – the past.

Next, Anzac – and its special day – have always been contested. Since 1916 many war veterans (not least the original Anzacs who protested against the politicisation of the war they fought) have refused to take part in commemorations. This year Douglas Newton’s new book about the soldier and objector Private Edward James Ryan highlighted the deep divisions among soldiers and broader society about Australian involvement in the first world war.

While recovering in England from wounds and shellshock in 1916 (and being readied to re-enter the western front slaughter) the Australian wrote “to the man the pro-war newspapers depicted as the best-hated and most dangerous … in Britain” – the anti-war Labour MP Ramsay MacDonald.

Ryan’s letter, Newton writes, “glowed with the white heat of passion”; he claimed to speak for other Australian soldiers who, he insisted, “hated the war”.

“They called the battlefield ‘the Abattoirs’ … He seized his chance to put down on paper the real opinions of those Australian troops, because the British press [mirrored by the mostly jingoistic Australian!] was hyperventilating about how much the brave Australians ‘relish the glories of war’ …

“Ryan wrote [of how] two men fresh from the battlefield had just told him that they ‘would rather be shot than face another bombardment like we received at Pozieres’. So, Ryan complained, the blood-and-thunder newspapers were lying about the Australians. Ryan railed at one newspaper in particular for depicting the Anzacs as ‘bright & cheering’, hooraying’ as they came away from the Somme battlefield. The truth was, wrote Ryan, that the ‘frightfulness’ of the bombardments at the front was ‘beyond their imagination’ …

“Every soldier was ‘absolutely sick of the whole business’.”

An awareness of the unpalatable truths about war – the crimes committed by Australian soldiers, for example, in the name of their country, the legacies of addiction and domestic violence among veterans – might well instil in the thoughtful young an unwillingness to blithely fight in the conflicts politicians might wish to commit them to. That’s no bad thing. To suggest they could somehow be inculcated – indoctrinated – by the curriculum to unthinkingly become yellow, treasonous peaceniks might say more about the minister. It’s also condescending.

Perhaps the minister would benefit from a reading of Newton’s book. Similarly, given that he’s so concerned about some new potential “woke” black-armband contestability of Anzac for all its supposed unhealthiness and national security imperilment, he might also have a go at Alan Seymour’s The One Day of the Year. It remains one of Australia’s most popular plays.

It’s a simple story that teases out the complexity of – and, yes, the urgent need to contest – all things Anzac, looking beyond the sentimentality and myth too often attached to Australian war commemoration.

It was published in 1958. Hardly novel, eh minister?