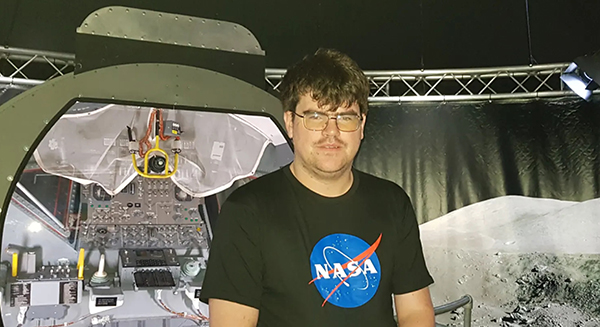 Documentary producer Stephen Slater was deep into work on a film about the Apollo 11 moon mission when he got a call that would transform the project.

Slater, who has a lifelong love of the space program, had painstakingly spliced together low-quality 16-millimetre footage of the lead-up to the mission shot by NASA employees, as well as footage taken of Mission Control during the mission itself.

However, after he made inquiries with the US National Archives, the project was launched into the stratosphere.

“Four months into production, we get the news about the 70-millimetre stuff,” Slater said.

The “70-millimetre stuff” was 165 reels of high-quality film taken by a professional crew for a NASA-commissioned documentary.

For Slater, it completely changed the shape of the documentary.

“That [footage] takes what could have been a small, short film, into something that you could show in IMAX,” he said.

The eventual documentary, Apollo 11, directed by Todd Douglas Miller, has been hailed by critics for its incredible behind-the-scenes look at the lead-up to the moon mission.

Slater is at the end of a whirlwind tour to promote the documentary, and came to Brisbane to see the NASA exhibit at the Queensland Museum, which also coincides with the 50th anniversary of the moon landing this year.
He and his team devised a special rig to scan the 70-millimetre film and convert it so it could be edited and made into the finished documentary.

“It’s like detective work, you’re trying to find reference points like clocks, if they filmed the clock on the wall you could use that as a reference point,” Slater said.

“All these reels were spliced together so you didn’t know when they were shot.

“If it was during the moon walk you have to TV reference, but otherwise it came down to looking at staff lists and seeing who was on shift at the time.”

Some of the footage also includes incredible slice-of-life vision of the bystanders who gathered at Cape Kennedy – restored to its former name Cape Canaveral in 1973 – to watch the launch, with the high-detail film capturing a lady fixing her hair on the roof of a car while others cook on portable barbecues.

That footage is some of Slater’s favourite from the reams available because it shows how people at the time were captured by the quest to put a human being on the moon.

“I had shot lists for a lot of the stuff that came from the archive, so I had an idea it was going to be good,” he said.

The film itself was in extremely good condition as it had been sent to the archives shortly after it was taken and used for the initial documentary.

Incredibly, the raw footage of the moon landing itself, which was recorded on data tapes, was wiped by NASA in the ’80s and ’90s so the tape could be reused, although many copies of the famous footage existed, albeit in a lower quality.

The new documentary premiered at this year’s Sundance Film Festival in the United States, and has since been released widely, including in Australia.

It has since become the highest-grossing documentary of this year so far, taking in more than $8 million at the box office.

The reaction to the finished work has made  Slater very happy his hard work is being appreciated.

“Kids especially love it. I never saw it as a kids’ film, but there you go,” he said.