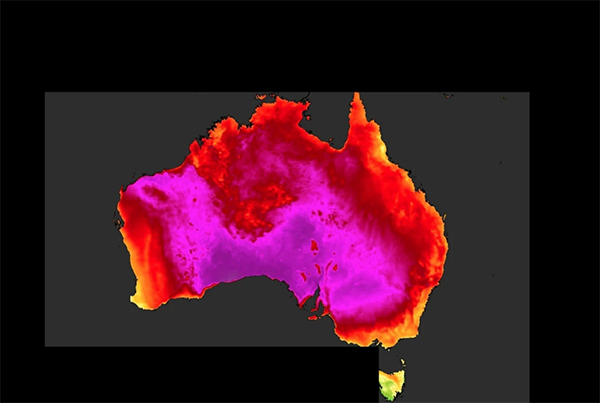 Scientists say the role of ‘exceptional heat and dryness’ can’t be ignored as factors contributing to the bushfire crisis – and nor can the need to reduce carbon emissions here and abroad. Credit: Weatherzone.

Eighty leading researchers have called on Australia’s governments to “acknowledge the gravity of the threat posed by climate change” and cut greenhouse gases “to safeguard against catastrophe”.

An open letter, signed by present and recent Australian Research Council laureates, said while many factors contributed to the bushfire crisis, “the role of exceptional heat and dryness cannot be ignored”.

“Temperatures nearly everywhere on Earth have been rising for decades, a clear result of the build-up of greenhouse gases in the atmosphere from fossil fuel use and other human activities,” it said.

Bushfires have burnt through about 12 million hectares across Australia this season, or about 1.5 times the size of Tasmania. The unprecedented scale of the fires came as the country recorded its hottest and driest year in 2019, the Bureau of Meteorology said earlier this month.

Steven Sherwood, an atmospheric scientist at the University of NSW, said the letter had been signed by researchers ranging from the physical sciences to engineering, humanities and the law.

Sent to the leaders of the four main political parties, it was prompted by “frustration about the lack of action” on climate change and also recent talk “about thinning out the woods [and other steps] that did not really address the issues”.

While climate impacts from a warming planet by about 1 degree were also bad, “they will multiply in a non-linear manner” as temperatures increase, Professor Sherwood said.

The letter noted “the best part of another degree” was locked in, “even if very strong international action is taken to reduce [carbon] emissions”.

“This means further increases in extreme fire risk, heat waves and flooding rains; ecosystems degraded and wild species forced to migrate or vanish, agricultural activities moved or abandoned, challenging our food security and so on,” the letter said, adding environmental degradation and social disruption would be “much greater” still without strong action.

It said Australia and the world had to transition eventually to net-zero greenhouse gas emissions. While “a huge task”, it was achievable “and less risky and irresponsible than allowing unmitigated warming”.

Professor Sherwood said there were “very few countries” doing what was needed to cut emissions, and “there were no policies in Australia to do what’s needed”.

The letter follows a statement from the Australian Academy of Science earlier this month that declared this season’s bushfires were “unprecedented anywhere in the world”, and also drew the link to global warming.

“The scientific evidence base shows that as the world warms due to human-induced climate change, we experience an increase in the frequency and severity of extreme weather events,” it said.

“As a nation, we must deal with extreme weather events more effectively than we currently do.

“As such events become more frequent and severe, we must adapt … as well as strengthen [greenhouse gas] mitigation efforts.”

The academy also noted that visits to its website were up 30 per cent compared with a year earlier, with its “What is Climate Change?” page the most visited. 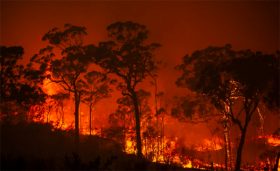 Bushfires have burnt though as much as 12 million hectares of Australia this fire season – and climate scientists warn future impacts will likely rise even faster than temperatures. Credit: Wolter Peeters.