You are here: Home » Articles filed under: 'News' » Article: 'Archaeology and artefacts' 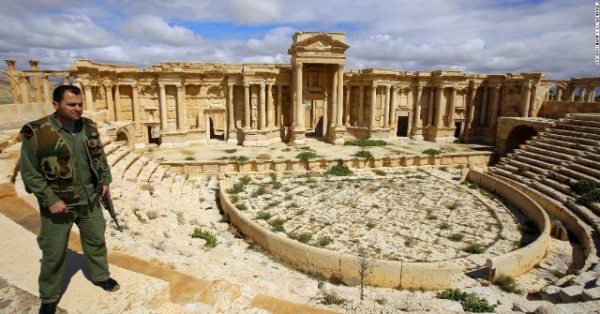 A police officer patrols the ancient ruins of Palmyra in the Syrian desert. Palmyra has been damaged during Syria’s Civil War, and it is now feared that the ruins are under threat from the ISIS militant group. Source: far30news.com.

There’s good news and bad news in the world of archaeology.

Deakin University’s Benjamin Isakhan says our cultural heritage is under threat like never before, increasingly vulnerable to the bull-dozers and sledge-hammers of the ideologically zealous.

Priceless artefacts are being destroyed on an ‘industrial’ scale, says Isakhan, and he’s now building a global database to document the recent treasures destroyed in both Syria and Iraq.

But the good news is that modern archaeology has moved well beyond the pick and the dusting brush, embracing new technologies that allow for increased accuracy and heightened collaboration.

Journalist [archival]: ISIS has reportedly damaged an archaeological site in northern Iraq using heavy machinery. That’s according to Iraq’s Ministry of Tourism and Antiquities which posted a statement on its website Thursday and said ISIS bulldozed the ancient city of Nimrud…

Journalist [archival]: Just south of Palmyra lie these ancient ruins that have survived for 2,000 years. But this UNESCO world heritage site in Syria is now at risk of being destroyed by so-called Islamic State militants. As they entered the main city slightly further north…

Journalist [archival]: If ISIL were to destroy the classical ruins, the ruins in Palmyra in Syria, this would equal some of the other atrocities they’ve committed against our civilisation.

Antony Funnell: Armies, insurgents and armed fanatics have been looting, destroying and repurposing sites of archaeological and cultural significance for millennia. Sad, but true.

So, is what Islamic State is now doing in Iraq and Syria any different? Well, Deakin University’s Benjamin Isakhan says it is. He says our cultural heritage is under threat like never before, increasingly vulnerable to the bulldozers and sledge-hammers of the ideologically zealous.

Priceless artefacts are being destroyed on an industrial scale, says Isakhan, and he’s now building a global database to document the recent treasures destroyed in both Syria and Iraq. He’s among our guests today on Future Tense as we look at archaeology and the artefact, current risks and future possibilities.

We’ll also hear from the Queensland Museum’s Chantal Knowles who explains why those who scour the past, always have an eye firmly on the future.

Chantal Knowles: Museums collect objects and research objects, that’s what we do, and when you are collecting objects you are thinking about the future, you’re always thinking about the future, and you’re trying to predict what will be meaningful to the generations that follow. And you’re also working with the fragments of the past, thinking what’s meaningful to people today. And it’s really hard to know when an object will come to the front of the storehouse. And I say that as if an object can walk to the front of the storehouse, but objects do seem to have that agency which pushes themselves forward at different moments.

Antony Funnell: Chantal Knowles. And we’ll hear more from her shortly. But let’s go straight to Dr Benjamin Isakhan and the deliberate targeting of sites of archaeological importance.

Benjamin Isakhan: I often say that for about as long as we’ve been building culture and building cultural institutions and artistic relics and so on, we’ve been tearing them down, and that’s absolutely true. You can go right back through the history of human civilisation and you can find many examples of burning libraries or destroying churches or tearing down gods and relics of other civilisations.

But in terms of the scale of what we are witnessing at the moment, particularly in the Middle East, it is completely unprecedented, it has no parallel in history, and that is simply because the people doing this kind of heritage destruction have access to technology that earlier empires and earlier iconoclasts and earlier people who would want to tear down the monuments of the past simply didn’t have. They have modern military technology that enables them to do industrial scale heritage destruction in a very short amount of time. So what would have taken years to destroy with shovels, for example, at an archaeological site, now takes days to destroy with bulldozers and heavy equipment and heavy machinery and so on. So really I think this speaks volumes about the scale of what’s happening and how serious it is and how much of it is going on.

Antony Funnell: It is important to remember, isn’t it, that this is not just the destruction of Iraqi or Syrian culture, this is world culture, isn’t it.

Benjamin Isakhan: Absolutely. When we talk about Iraq and Syria, the term that we’ve often used is ‘the cradle of civilisation’. What we mean by that is the cradle of the entire story of human civilisation.

Antony Funnell: What are the future implications of the ISIS attacks that we are seeing on cultural heritage in the Middle East? Would you expect because of their example that others in the future will follow, will start to see cultural sites increasingly as political or ideological weapons?

Benjamin Isakhan: Perhaps your listeners will remember way back in 2001 the earliest seeds of Al Qaeda at that time, also enmeshed with the Taliban, destroyed what are known as the Bamiyan Buddhas in Afghanistan, and this made global headlines. And what fascinated the Taliban at the time and the earliest incarnations of Al Qaeda was that of all the terrible things that they had been doing, and they had been doing all kinds of atrocities in terms of quashing human rights and creating a very oppressive state and so on, of all the terrible things that they were doing, the thing that grabbed international global news headlines was their destruction of the Bamiyan Buddhas in Afghanistan. And I think that that served as a key lesson for them in terms of how to maximise the impact of the kind of message of terror that they are trying to send out to the world.

You fast-forward to a group like ISIS who have learnt all of these lessons, and realise that of all the things that they are doing, of all the horrific humanitarian tragedies that are unfolding on a day-to-day level under the Islamic State, the thing that is grabbing global attention are those moments in which they attack heritage sites. And so the future of this is really scary because if ISIS are able to do this kind of mass heritage destruction today, and future generations are likely to learn from that and see the impact of that globally, then it seems very reasonable to conclude that later forthcoming iterations of groups like ISIS, these very extremist fundamentalist groups, will continue that legacy and will take any opportunity to destroy anything that the world holds to be significant heritage.