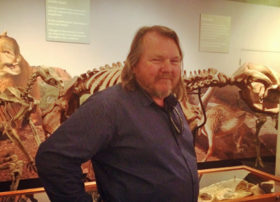 Mr Hamm, an Honorary Fellow of the South Australian Museum and La Trobe University PhD candidate, is an arid zone research archaeologist who has worked for the last nine years with the Adnyamathanha people in the Flinders Ranges along with geomorphologist Dr Peter Mitchell, geochronology specialists Dr Lee Arnold and Professor Nigel Spooner from the University of Adelaide, and other researchers from Flinders University and the University of Queensland, to uncover a series of world-firsts in South Australia.

“We excavated a small rock shelter site in the Flinders Ranges in an effort to understand the adaptability of human populations in the Australian arid region as well as causes of megafaunal extinctions 40,000-50,000 years ago,” said Mr Hamm.

“The results of our scientific investigations tell us that people not only settled in the arid interior of Australia within a few millennia of entering the continent, but they also developed milestone technologies much earlier than we have previously thought.

“The Warratyi Rock Shelter in northern Flinders Ranges has by far the earliest-known evidence of the use of ochre pigment in Australia as well as hafting technology in Australia and South-east Asia” Mr Hamm said.

The advent of hafting, involving joining two elements such as a wooden handle and stone blade, represents a significant development in technology.

“The hafted tools we found date up to 40,000 years in age, which demonstrates the early complexity of Australian Aboriginal people’s knowledge,” said Mr Hamm.

“This is an incredible find as, prior to our research, the oldest artefacts of this kind had been dated at around 9-10 thousand years old,” he said.

In conducting this research Mr Hamm worked closely with the Adnyamathanha people, who played a pivotal role in providing cultural and historical advice, as well as assisting with fieldwork and logistical matters.

“To see scientific evidence confirming our cultural activities over such a long period of time makes us feel proud to be Adnyamathanha. On behalf of the Adnyamathanha Traditional Lands Association I thank Giles and his team for the truly fantastic work they have done,” Mr Anderson said.