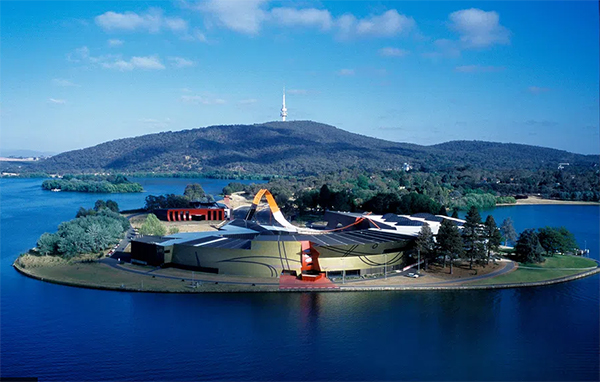 Designed by iconoclastic Melbourne firm ARM Architecture, the museum was described in Architecture Australia at the time as “garrulous, colourful and melodramatic,” in a review by John Macarthur that straddles the line between praise and scepticism.

In his speech at the opening, PM Howard said that of all the important buildings in Canberra, “none I believe in time will have as great an impact as this National Museum.”

What he didn’t mention was that prior to the opening his government had been railing against a particular design feature of the building that stood behind him. ARM had surreptitiously plastered the word “sorry” in braille across the colourful facade – a pointed attack on the government’s refusal to apologize on behalf of the government for the horrors of the stolen generation. Unfortunately, the secret message was discovered by a hawk-eyed engineer. At the government’s insistence, some of the offending braille was covered over with silver discs, but as ARM’s Howard Raggett revealed in the lead-up to this anniversary, not all of the braille was covered up. “I don’t know that anyone checked up on us, and we may not have been as thorough as we should’ve been,” he told the ABC.

This act of defiance is apt for an architecture practice that, in designing the National Museum of Australia, sought to radically challenge the concept of what a national museum could be, and to offer a sharp, humanist critique of Australia’s history – in the midst of the “history wars.”

Describing the way the architects conceived of history, Raggett wrote at the time, “We liked to think that the story of Australia is not one, but many tangled together. Not an authorised version but a puzzling confluence; not merely the resolution of difference but its wholehearted embrace.”

The design of the museum was based on two “big architectural ideas”: the Boolean string, meant to signify the tangled nature of Australian history, and the jigsaw puzzle, meant to convey that the museum was conceptually unfinished.

The building is designed to appear to be the centre of a knot, with trailing ropes or strips extending from the building, symbolically bringing together different stories. A central garden, the Garden of Australian Dreams (GOAD) designed by Richard Weller (Room 4.1.3), evokes a range of different cartographies. In a Landscape Architecture Australia piece reflecting on the legacy of this garden in 2020, Anna Chauvel wrote, “The static nature and materiality of the GOAD means it has not been able to respond to our nations’ evolving and maturing attitudes and values. Instead, its physicality captures, in perpetuity, the ideas, beliefs and values that existed at the time of its design – which were, in fact, in themselves, unfinished business.”

Unsurprisingly, the museum itself has also divided opinion from its inception, both for its architecture and its presentation of history. Art historians have called it “as puerile as it is ugly” while the Daily Telegraph slammed it for its “sneering ridicule for white Australia.”

ARM received awards for public and interior architecture at the ACT Architecture awards but was snubbed by the national awards.

In his AA review, John Macarthur wrote, “No one seeing the National Museum of Australia can doubt the architects’ skill and determination, but many will doubt their wisdom, taste and professional comportment.”

He also noted, however, that the architects had “managed to say something about the national story and achieved what few today think possible or desirable – a ‘high’ architecture of figurative meaning.”

If a 2018 masterplan that calls for the museum to be extended out into Lake Burley Griffin is realized, then the museum will no doubt continue to be a magnet for controversy and debate.