You are here: Home » Articles filed under: 'News' » Article: 'Archives & what do we do'

Archives & what do we do 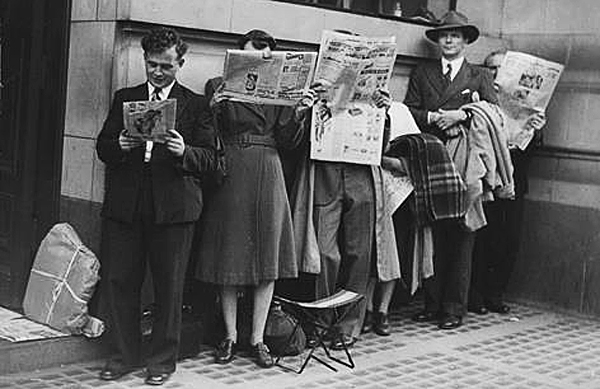 We love our media. Image unidentified.

Dominic Case, The nation’s archivists – What do we do with what we’re saving? – Part two, ArtsHub, 20 October 2017

The users of national collections are more than users – they have the political power to save and resource the system. Dominic Case continues his coverage of the Digital Directions Symposium hosted by the NFSA.

If the morning session had been about how users discover and use collections, the afternoon session was to focus on how institutions make their collections available. As it turned out, each session would show how blurred this distinction has become.

Users are the experts

Ross Harley, Dean of Art and Design at UNSW described yet another research tool – Design Art Australia Online (DAAO) – which provides access to over 10,000 biographies – and works – of artists and designers. The data is open-source, and editable by users (in the style of Wikipedia, one of many other data sources that DAAO interacts with). Harley echoed a truth that most institutions are discovering – that their users often know more than their own ‘experts’.

Through a YouTube clip played by Harley, Deb Verhoeven explained the principles behind HuNI (Humanities Networked Infrastructure), a project she leads, which combines data from a number of cultural databases and websites (including DAAO). Research in the humanities, she said, should be like a journey to an unknown destination. Verhoeven criticised conventional search algorithms, which, by taking the shortest and most efficient pathways, became closed loops. ‘Google is great at telling you want you already know’. HuNI Users are encouraged to build and share their own links between data. Thus HuNI takes a ‘meandering’ path, leading along non-logical pathways to serendipitous discoveries. It harnesses the insights of the crowd, to help you discover what you don’t already know.

James Kavanagh, National Technology Officer for Microsoft, goes beyond past expert curators, networked databases and crowd-sourced links, to Artificial Intelligence. In this context, he traced three stages of the development of AI. At first it was thought that simply connecting enough computers together would work, but then people produced mathematical proof that it wasn’t possible. Next, it was proposed to codify every rule in the world, and create a universal rule-based system. No good either.

The current approach is based on learning. AI systems try a solution to a problem: if it works the system is rewarded; if not, it tries again. This is more likely to be successful now, he said, because of cheap parallel computing via the cloud; the massive amounts of data now available online; and better learning algorithms.

Kavanagh demonstrated a video indexing system. He had previously loaded a number of short clips from the NFSA website (its recent collection Reliving the Eighties), and added lots more related clips from YouTube. Next, he had let the system index them (recognising and tagging not just words in text, but words in soundtracks and visual objects such as ‘horse-like mammals’).

Now, he entered a search term (‘cars’). The response was immediate: ‘no results found’. Nor did he get any results for other search terms.

Such an automated system is clearly possible with image, sound and text recognition tools currently available. Unfortunately, the conference presentation system was run on an Apple Mac, and this was enough to defeat both the presenter (yes, from Microsoft) and his prototype system. No reward – try a different solution!

Moving on, Kavanagh played a clip of Paul Hogan’s ‘slip another shrimp on the barbie’ Australian Tourism Commission commercial from the NFSA collection, to demonstrate a real-time speech-to-text process. This was better than adequate though not entirely accurate – but he explained that crowd-sourced correction would easily fix up errors (eg) ’sleep’ to ‘slip’, and, importantly, the machine would learn this correction for next time.

Katrina Sedgwick is the CEO of ACMI (The Australian Centre for the Moving Image) in Melbourne, last year the most visited motion picture museum in the world, with 1.45 million visitors.

ACMI is progressively digitising its 170,000 items (in a ‘dramatic ending’ a YouTube clip says that its collection of film and video is deteriorating and asks for the viewers’ help). Among ACMI’s future objectives, Sedgwick listed the need to enable broader access; to renegotiate re-use rights with donors, particularly for remixing and repurposing applications; to assert the public value of their collection; and to explore the digital preservation requirements for forms that are still emerging.

Garden design, the library, and an old farm building

Last in this session, Marie-Louise Ayres, Director-General of the National Library of Australia, told us the story of her home garden. Moving in twenty years ago, she found the garden quite unrelated to the environment: inward-looking and planted with noxious species like privet hedges. Over the years she planted a garden that would grow over time. But it was ‘to fit a future that looks like now’. Now faced with a changing climate, she wonders if she should have planted differently, all those years ago.

She is pleased to say though, that the NLA is not ‘haunted by trees not planted’. As far back as 1996 they started archiving websites, then sharing their software with other institutions. Fifteen years ago they started to digitally preserve their Oral History collection: a large proportion is now available online and the process will be completely up to date by 2018.

NLA’s big success story is Trove, now ten years old, but it had many prototype forerunners in the decade before. After scanning/digitising, text has been through OCR (Optical Character Recognition) and finally through $35m worth of volunteer work correcting the OCR results.

Moving her metaphor from the garden into the house, Ayres described research tools developed more recently overseas (e.g Europeana) in architectural tems as stately mansions or stylish modern houses. By contrast Trove felt like a sprawling daggy Australian farmhouse. But budget for modernisation is available, and she saw Trove becoming a prize-winning Glenn Murcutt house. Pressed on how this funding had become available after the threats to basic operating costs for Trove a couple of years ago, Ayres was emphatic that the strong advocacy for continued funding was driven entirely by users, and not by NLA itself.

Discussion: how to cope with it all

The abundance of collected information ‘out there’, and items in collections, as well as the rapidly changing technical environment ran through the panel discussion, chaired by David Fricker (Director-General of NAA).

Ross Harley spoke of the difficulty of choosing what to preserve: Marie-Louise Ayres said simply ‘you do what you can’. Only three or four percent of the NLA collection is digitised, and it won’t ever all be digitised. She agreed though that it was possible for small collections to achieve 100% digitisation.

Katrina Sedgwick said the big burden was cataloguing, and that ACMI stipulated that all donated material from the community must be fully catalogued by the donor. Meanwhile it was crucial to pay for good researchers, and to rely on their ‘curatorial instinct’ to properly prioritise the digitisation and preservation program.

Meanwhile, digital is by no means a robust archival technology in the long term. While formats change and media deteriorate, James Kavanagh said that Microsoft still archives on tape, but is backing laser-etched glass as a long-term, high density storage medium.

The final panel – and conclusions

Questions about the uncertainly of funding, where cuts seemed to question the value of cultural collections, continued. Most speakers spoke of pragmatism, optimism, sometimes grief over necessarily abandoned programs.

Vicki Sowry mentioned research showing that more Australians visited a cultural event than a sporting event, and that they value their culture more than their sport: but we seem poor at communicating that. Ross Harley agreed that we count heads at events well but don’t measure the value or enjoyment received: the sport sector does that much better. If we could get that right, he said, the funding would flow.

Each speaker summed up their impressions of the day in a sentence – and what better way to provide an executive summary:

Jo-anne McGowan spoke of shifting sands as the television landscape was changing, and audiences were getting more powerful.

Vicki Sowry recognised that there was on one-size-fits-all user: different users had different needs.

Ross Harley felt that digital was a ‘wicked problem’ but welcomed the chance to continue to share and collaborate.

Fiona Fieldsend thought it was important to build in an evaluation for everything that we do, to be prepared for the future – and to be ‘up for it’.

Katrina Sedgwick had been struck by the cultural risk of losing a USB stick, and reinforced the value of serendidipity and spontaneity: no algorithms, just curiosity.

Gavin Tapp was happy to have spread the word about GovHack.

Shaun Angeles thanked everyone – and said ‘let’s all stay human’.

Marie-Louise Ayres thought about non-users: Trove was potentially very useful to many, including indigenous Australians but the user interface is not friendly.

Jan Muller reflected that debate had once raged over open access versus copyright; then over access versus preservation; or preservation versus digitisation. Now we ask about Digital Directions, but he suggested that digital will soon be seen as just the way to get wherever we want.

However, it is very likely that we are only at the start of the digital journey. As we progress, it will be important to record where we have come from and what we pass along the way. Let us not to lose sight of the fact that digital records have an exciting life – but it’s a high maintenance life: they are, indeed, records on life support.