You are here: Home » Articles filed under: 'News' » Article: 'Are Covid-safe theatres really safe in NSW?' 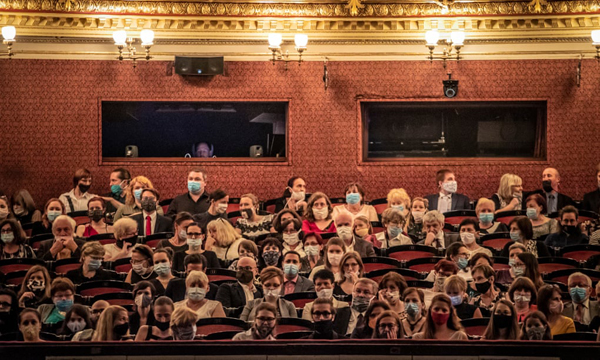 Mask-wearing and crowd management rules vary from venue to venue – and are difficult to enforce. Photograph: Martin Divíšek/EPA.

Sydney Opera House has become the latest to mandate mask-wearing – but even with safety measures in place, going to the theatre carries ‘an incredible risk’

When the Sydney Opera House tightened its Covid-safe policy on Thursday, making masks mandatory inside all foyers and theatres, it became one of the last major venues in Sydney to do so.

The new rule applies from Saturday 2 January, coinciding with the opening nights of two major productions: Rent, at the Drama theatre, with a reduced audience of around 400; and Opera Australia’s The Merry Widow, at the Joan Sutherland, with a 75% capacity of 1,100.

Mask-wearing will now be required for patrons over 12, as the venue “continues to closely monitor NSW Health guidelines” and adjust their own policies in order to keep “everyone on our site” safe, a spokesperson says.

After a year of devastating cancellations and closures, the industry is eager for audiences to return: as Opera Australia’s artistic director Lyndon Terracini says: “We’ve been out of the Opera House for 10 months – that’s a long time.”

But even when masks are mandated, is going to a Covid-safe theatre really Covid-safe?

This week, NSW state premier Gladys Berejiklian has used each daily press conference to strongly encourage the public to wear masks – but unlike Victoria, the state has so far resisted pressure from epidemiologists and the Australian Medical Association to mandate it. In theatres and cinemas, masks are “strongly recommended” by NSW Health – but they are not mandatory by law.

Instead, theatres may recommend face masks or make them a rule for entry – but in practice, mask-wearing in theatres is inconsistent across the city and difficult to enforce.

Like other major theatres in NSW, including Belvoir, Sydney Theatre Company and the Lyric Theatre, the Opera House is complying with health guidelines that allow it to register as a “Covid-safe” venue. Like other major theatres, it is also operating with social distancing exemptions granted by NSW Health: if a theatre under this exemption caps its audience at 75%, patrons do not need to be socially distanced by the recommended 1.5 metre; each venue manages the distribution of empty seats differently, but many theatres are seating group or pair bookings side-by-side, leaving one seat empty between them.

(Disney’s Frozen – initially expected to deliver more than $46m in visitor expenditure to NSW – has permission to play to even larger audiences at the Capitol theatre, operating at 85% capacity due to a special exemption from health minister Brad Hazzard.)

Epidemiologist Hassan Vally from La Trobe University says that the level of crowding in a theatre is “an incredible risk with people in close contact for a long period of time indoors, especially if they are not wearing masks”.

No venue, he stresses, would be 100% safe – “there is no situation that is completely safe other than staying in your own home, alone” – but being indoors, with people sitting in close proximity to others for up to three hours, before mingling in crowded foyers and bars, comes with increased risks of virus transmission – even with masks mandated.

“Audiences need to behave in a way consistent with the assumption that the person next to you might actually have the virus,” Vally says. “You have to have the most distance between groups of people or each person, you want to have your mask on, and you’d rather be at a 90-minute performance than a three-hour performance, if you were sitting next to someone who has Covid. The longer you are exposed to that person the more likely the virus could be transmitted to you. They are the three principles to protect yourself from getting an infection: distance, time and shields [masks].

Vally says the theatres may be violating those principles if there is no social distancing, and if people are indoors for extended periods of time and not wearing a mask – or not wearing it properly, or taking it on and off to eat, drink or talk.

Some theatres are asking audiences to raise their mask only to eat or drink, and to wear their mask covering their nose and mouth at all other times. But this hasn’t stopped people taking their masks off in a foyer, or leaving them dangling around their necks.

During the performance, it is logistically difficult for theatres to police audience members who take their masks off or lower them off their nose – rendering them ineffective – when the lights go down. Wendy Strehlow, an experienced usher at the Seymour Centre, says audiences are mostly willing to abide by the rules.

“[The majority] of people are terrific but there’s always one person who says they are claustrophobic and I have to repeat the venue’s policy,” she says. “One time, we had the back four rows empty so I was able to move the person up there by themselves. I haven’t encountered aggressive opposition. The people coming to the theatre have really missed it and want to be there to support the industry.” 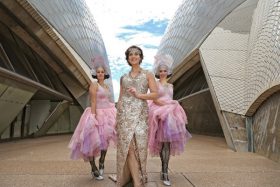 ‘Enforce mask-wearing and close the bars

Mingling in the foyer and standing in crowded bars waiting for a drink is especially concerning, Vally says.

“People are not spacing themselves apart in the queue for a drink and the foyers get very loud, so people are talking with raised voices. People can be yelling,” he says.“If we want theatres to remain open, then it would be safer to enforce mask-wearing and close the bars. That would reduce risk but it is still not 100% safe.”

Sydney Theatre Company seems to have the tightest safety measures at the Roslyn Packer theatre, with Covid marshalls preventing anyone from entering without a mask and the bars closed for all performances of The Picture of Dorian Gray.

Disney’s Frozen is shepherding audiences in with timed arrivals and mandatory masks but the bars are open. Pippin at Sydney Lyric also has mandatory masks and open bars, as does Belvoir. Magic Mike – which is being performed in a purpose-built Spiegeltent at the Entertainment Quarter – is not mandating masks, and is serving food and drinks.

At the Sydney Opera House, where Rent and The Merry Widow is about to open, masks are now mandatory, but the bars are open before and after the show. To facilitate social distancing in the foyers, audiences are allowed to take beverages into the theatres or are encouraged to sit spaced out at tables.

Lyndon Terracini says he will be attending the opening night of The Merry Widow in “black tie and mask”.

“It’s disappointing, frankly, as I was hoping for a really ‘up’ time but we seem to be heading for another bleak time,” he says. “But of course, we want to protect everyone’s health.”