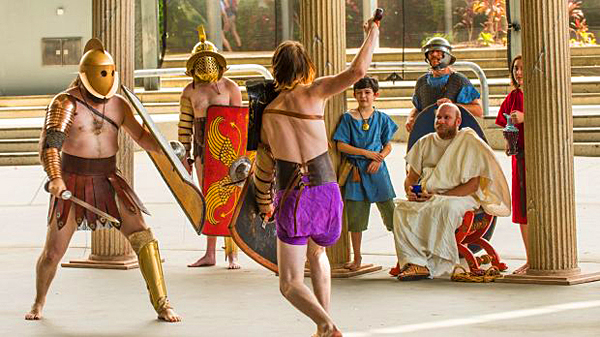 Exhibition attendees will be able to dress and fight like gladiators. Source: The Age.

They were the elite sportsmen of their day, larger-than-life celebrities whose names were roared by thousands who were – quite literally – baying for their blood.

Queensland Museum chief executive and director Professor Suzanne Miller said some of the objects, collected from museums across Italy, had never left that country.

Some of the highlights of the exhibition for Professor Miller are the gladiator’s outfits.

“I think the gladiatorial helmets are quite extraordinary, they are exquisite pieces,” she said.

“And we’ve got some really beautiful sculptures – they’re quite challenging to transport around the world as they’re obviously extremely delicate and very heavy, so we’re really pleased we were able to negotiate to bring some of those to Queensland.”

The exhibition will showcase the lives of gladiators, offering insights and busting myths about how they lived and fought in gladiatorial competitions.

“They were massive events, it was almost like going to the footy,” Professor Miller said.

“There’s a lot of myths around it… it wasn’t necessarily a fight to the death, for example.”

She said gladiators – most of whom were slaves – were often treated as “prized possessions”.